by Roastbtrief
in Agency, Brands, Campaign
Reading Time: 3 mins read
A A 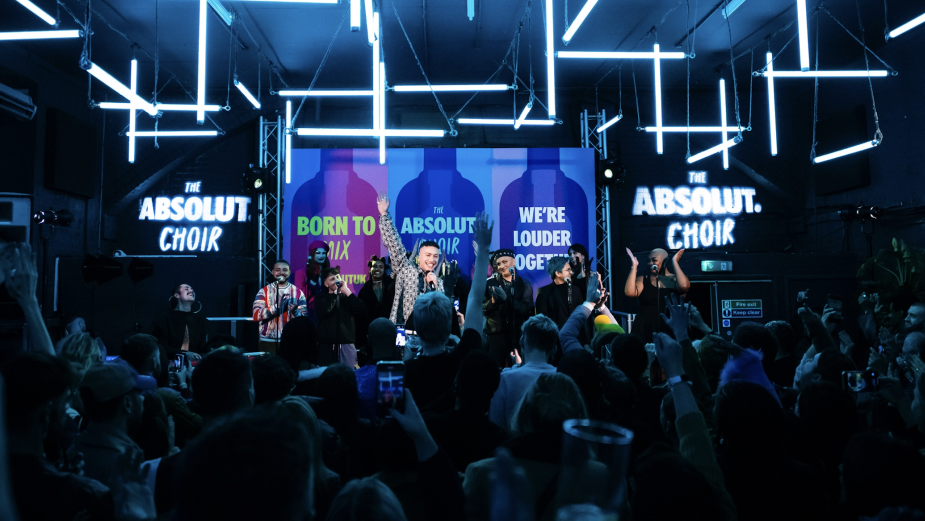 On Tuesday 22nd November, The Absolut Choir took to the stage to perform an emotional version of the hit song Shine, live for the first time ever in East London’s Night Tales.

The choir sang an entirely new version of Years and Years hit song Shine, rearranged for Choir voices, Olly and The Absolut Choir, turning up the volume on a variety of causes and conversations, proving that when we mix, we have the power to create a better, more open world.

Creative passions agency M&C Saatchi Sport & Entertainment has launched an inclusion campaign for Absolut UK, introducing The Absolut Choir – a first of its kind creative project raising the volume of inspiring changemakers who together, can build a more inclusive world.

Fronted by one of the world’s most trailblazing modern popstars, Olly Alexander of Years & Years, the Absolut Choir raises the voices of inspiring change-makers, pioneers and creatives across the UK.

The evening saw a mix of individuals, inspiring changemakers and celebrities come together to raise the volume on a variety of causes and conversations including body positivity, disability awareness and equal rights.

After their performance, Olly Alexander and the changemakers Kenny Ethan Jones, Nyome Nicholas-Williams, Max Churchill, ILĀ and Coda Nicolaeff opened a conversation on stage to raise the volume of causes including LGBTQIA+ rights, self-love, better disability awareness and body positivity; proving that when we mix together and raise each other’s voices, we have the power to change the world.

THE ABSOLUT CHOIR campaign was created by M&C Saatchi Sport & Entertainment as part of the agency’s Step Up offer, helping brands to invest in purpose initiatives to make culture more inclusive. The agency is dedicated to using communications to fundamentally shift deep-rooted attitudes and change behaviour. To deliver this work, the agency has created an ‘Inclusion Alliance’, a series of strategic partnerships with key organisations and voices, to help guide and shape their thinking and execution, ensuring authenticity reigns and the work has maximum impact.

M&C Saatchi Sport & Entertainment has been working with Absolut UK to establish its Born To Mix UK cultural programme, which sees unexpected and diverse creatives work together on a series of projects designed to drive conversation and progress in the UK. The first project, Second Skin Couture saw different worlds and minds in fashion mixing to challenge stereotypes and perceptions, while the Absolut Choir aims to demonstrate the collective power of mixing important voices together and raising them louder to change the world.

Speaking at the event, change maker Max Churchill said, ‘the project has created a space for me to reclaim and revisit my voice’. Another change maker ILA, Trans Voices commented: “I have never felt like I belonged, but I can truly say that this process has been an incredible journey for myself’. Trans activist Kenny Ethan Jones shared that ‘’working together as a Choir, has reaffirmed the importance of mixing with different communities. We have learnt so much from each other and now feel like family.”

Jodie Fullagar (she/her) co-managing director at M&C Saatchi Sport & Entertainment leads the agency’s DE&I strategy and Step Up expertise. She comments: “Last night’s event set a blueprint for inclusive brand marketing. The Absolut Choir is the very epitome of our Step Up commitment to make work that makes a better world. The Absolut brand has a long history of championing a more inclusive world and embraces a responsibility to shape culture, not just exist in it. This campaign with The Absolut Choir demonstrates the positive transformations that brands can provoke when they truly harness the power of their platforms to make culture more inclusive.”