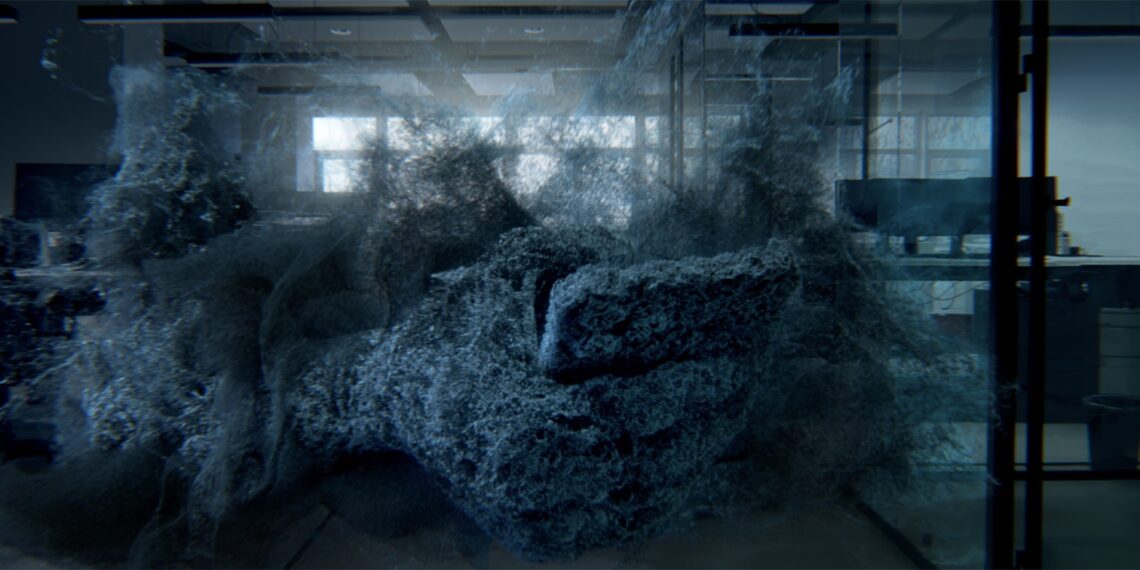 WorkSafe Victoria’s new public education campaign titled ‘It Comes In Many Forms’ created by Heckler via TBWA\Melbourne and OMD is made up of simulations that are packed with detail. Launched in June this year, the campaign addresses the many forms gendered violence can take, via a powerful visual representation to demystify the term. Heckler was tasked with creating a shapeshifting entity that would serve as the visual metaphor of the message.

Taylor said: “We wanted the campaign visuals to help build awareness about what work-related gendered violence is and to give a sense of the menacing and insidious nature of this type of behaviour.”

“Using a dark cloud to give shape to different types of gendered violence helps identify inappropriate behaviour and sends a clear message that every Victorian has the right to feel safe and respected at work, regardless of their gender or sexual orientation.”

Says Heckler Director, Cody Amos: “Creating the look of an effects driven character is always really fun, but also challenging. One interesting aspect is that it’s a very technical process to create the actual simulations. To tackle that, I developed both the look and the technical system to create the animation in tandem. So part of the process was trying different types of particle or volumetric simulations, and then exploring the different looks or styles you can get out of a specific technique. That way, if you land on something you like, you already know a lot about how you’re going to make it. Along the way we presented a lot of different looks to clients. Those looks were driven by all sorts of different things, including various particle types that were simulated more like sand or more like water, or smoky volumetric simulations. But essentially all that just boiled down to simple questions, like what texture do we like better? What shapes are more appealing? Do we like this sort of motion? Is this something we’ve seen before? I think we were all looking for something that felt a bit new. Something that made you not sure what it was supposed to be made of. It’s a sort of sandy smoky look in the end. It’s fluid and dynamic. It’s menacing, but not overly horrific.”

“For us, this was an absolute dream partnership! The agency and client were both amazing. Everyone was really collaborative and keen to make the best possible creative. This sort of project can be tricky for everyone too, as it’s a very complicated sort of animation, and quite an abstract creative concept. So it can be really hard to imagine the final output at the pre-visualisation stage. Which is tricky because we need to approve elements at certain stages to be able to move forward to the next stage. We tried our best to make things as clear as possible and made some process examples to help with this. But at the same time, TBWA Melbourne and Worksafe were incredibly trusting in us and in the process.“

The ‘It comes in many forms’ campaign is running across television, cinema, outdoor, social media, online, print and radio.