by Roastbtrief
in Advertising, Campaign
Reading Time: 6 mins read
A A 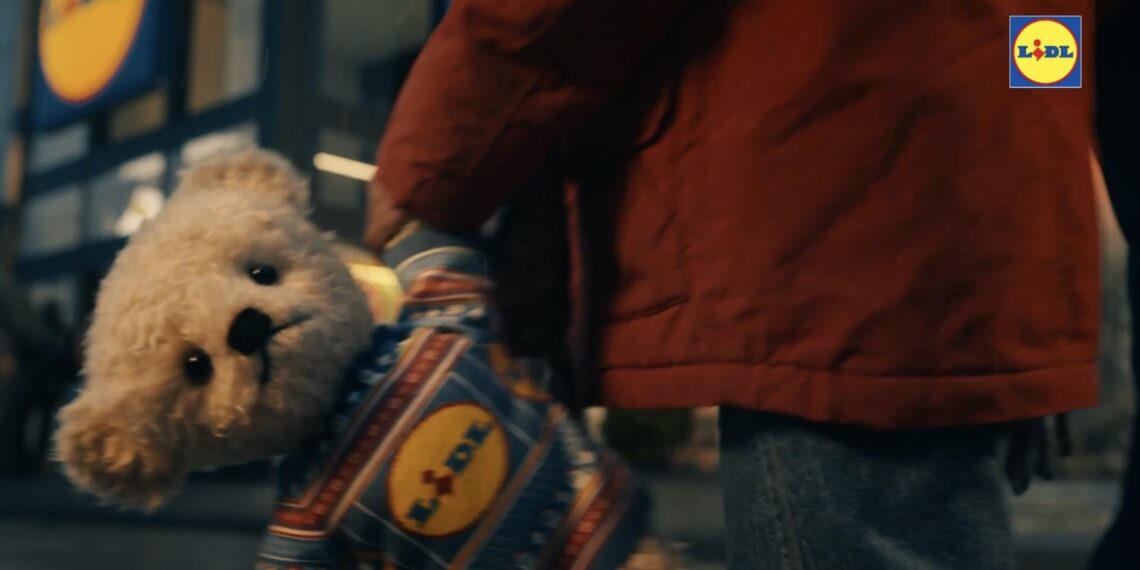 Lidl GB has today unveiled its hotly anticipated Christmas advert – featuring Lidl Bear, this year’s most unlikely Christmas celebrity. But this adorable yet expressionless bear is like no other Christmas character – and it absolutely won’t be on sale in Lidl.

The ‘paw-some’ Christmas advert will hit TV screens from 4th November 2022, on ITV during Coronation Street – however it won’t be the first we’ve seen of our furry friend. Eagle-eyed Brits may have already spotted Lidl Bear popping up across the country this week as the star of this year’s show has been teased ahead of its ‘paw-fficial’ premiere.

Lidl Bear’s story begins when a dad accidentally shrinks his Lidl jumper in the wash, and his young daughter has the ingenious idea of putting it on her teddy bear.

And, just like that, a star is born – finding fame in the aisles of Lidl before becoming the (expressionless) face of Lidl’s advertising campaign and experiencing the highs and lows of fame at Christmas time.

As the world around Lidl Bear goes crazy in its endeavours to make a little stuffed toy a celebrity, we ask ourselves: will Lidl Bear make it back home for Christmas with its family?

The hero 60’ will be supported by a series of 20’ and 10’ cut downs focusing on Lidl Bear and the family around the Christmas dinner table. Each cutdown centres around a different element of Lidl’s Christmas offering – alternative mains such as the Deluxe Vegan Garland, desserts such as the Deluxe Chocolate Cottage and favourite tipples such as Hortus Gin Liqueur.

The campaign will run across the festive period and be live across TV, BVOD, OOH, cinema, print, digital and radio.

Claire Farrant, marketing director at Lidl GB, said, “What stands Lidl Bear apart from other Christmas characters is its hilarious, deadpan expression. By displaying no emotion it manages to create humour and deliver our message about what’s actually important this Christmas.

“You also won’t be seeing Lidl Bear for sale in any of our stores – because, in the face of unrealistic Christmas expectations and pressure, we know what really matters is being with the people we care about.”

In fact, rather than selling the character, Lidl Bear has instead been the inspiration for Lidl’s Christmas charitable drive – helping to ensure every child experiences the joy of a beloved toy this Christmas. Lidl Bear’s Toy Bank is a nationwide donation initiative, giving new or unwrapped toys and games to children across the UK through the Neighbourly community network.

Customers can drop off new and unopened toys and games, to be gifted to children that need support in their local area. Donations can be anything – from a small stocking filler to something bigger. Sought-after items include toys, games, books, puzzles, and arts and crafts, for a range of ages.

In addition, the supermarket has committed £250k for charities during the festive period – including a £125k donation for the toy bank initiative – and has also pledged to donate more meals than ever over the festive period. As part of the supermarket’s long-standing work within local communities, Lidl GB will also donate a selection of festive food items as part of its regular food donations. These will go to local charities and community groups, which – together with their food surplus programme – will equate to over 1 million meals.

The campaign was produced and executed by Accenture Song. Media planning and buying is managed by OMD, PR by The Romans, and social media by We Are Social.

Nik Studzinski, Accenture Song chief creative officer, said, “At its heart, this year’s Lidl Christmas campaign is a cautionary tale told through the eyes of a little girl’s teddy bear, urging us to hold on tight to the things that really matter. Being with the people you love and sharing some delicious, great value food. In short, a Christmas you can really believe in.”