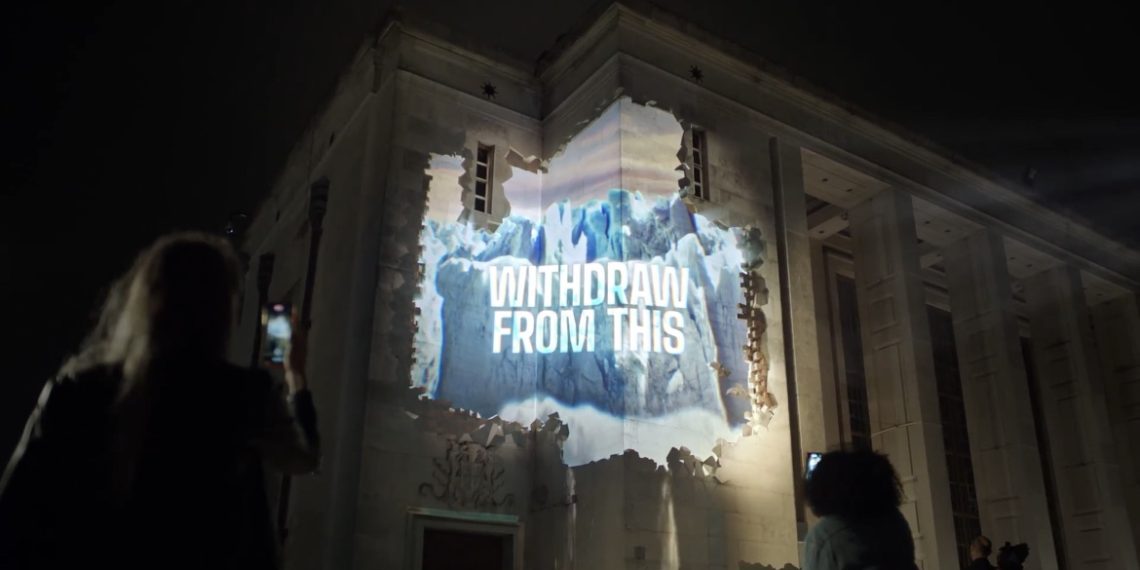 The Co-operative Bank calls on consumers to withdraw their money from banks that finance climate change in new campaign.

The Co-operative Bank is lifting the lid on the issue of fossil fuel finance today through a new campaign that urges people to ‘Withdraw From This’ in an effort to tackle the climate crisis. Produced by creative agency DENTSU CREATIVE, the dramatic advert, which airs for the first time on Wednesday evening, shows a customer taking money out of an ATM. As they do, the walls of the bank crumble away to reveal the journey their bank notes have been on. They flutter through scenes of worldwide devastation caused by the fossil fuel industry, before finally being dispensed into the customer’s hands.

“Do you know where your bank invests your money?” says the voiceover. “It could be logging in the Amazon. Or coal-fired power stations. It’s time to Withdraw From This.” The advert ends by calling on people to join The Co-operative Bank – a bank that hasn’t financed fossil fuel production for over 20 years. The ad was captured in a public environment, using world-first projection mapping techniques to stop passers-by in their tracks with striking images.

The campaign, which is running across TV, VOD, OOH, digital and social, positions The Cooperative Bank as ‘The bank you can hold to account’. The campaign will run for three months, launching on 21st September until 14th December.

The Co-operative Bank is currently the only UK high street bank with a customer-led Ethical Policy, which means that its customers’ values shapes who the bank finances. The most recent poll of 50,000 customers revealed climate change is still their number one concern. As a result, The Co-operative Bank does not provide banking services to any company involved in the fossil fuel industry.

To support the new campaign, The Co-operative Bank is urging consumers to visit Bank.Green, a growing movement that aims to put pressure on banks to divest from fossil fuels. Concerned customers can use the site to find out more about the fossil fuel investment practices of their current bank, then sign up to pledge that they will not fund fossil fuels by moving their money away from climate crisis funders.

In addition, The Co-operative Bank is an Ambassador of Zero Hour, the campaign to see the Climate and Ecology Bill become law. This Private Member’s Bill sets out a plan to address the full extent of the climate and nature crisis in the UK.

Deborah Darlington, brand, marketing and communications director at The Co-operative Bank, said: “Guided by our customer-led Ethical Policy, we’ve made sure that sustainability is at the heart of everything we do as a bank. It’s why we haven’t provided any financing to the fossil fuel industry for over two decades.

“However, it’s clear that many other banks lack this level of transparency. With this campaign, we want to draw attention to the fact that many people think about what they spend their money on as an ethical choice, but they don’t consider who they bank with and where they put their money is of equal importance. It’s a significant message that could have a big impact in tackling climate change, which is why we’re urging people to withdraw from this and back the sustainable banking movement.”

Tom Prendergast and Joe Stamp, senior creatives at DENTSU CREATIVE, said: “People don’t think about where money goes once it’s in the bank. We wanted to reveal that it can finance terrible things. So, we tore down the wall, to show people the unsettling truth happening behind the scenes.”

Sara Pouri, creative director at DENTSU CREATIVE, said: “The message behind this campaign has massive implications for how we all think about banking and its impact on the planet, so we wanted to make sure the creative delivered real impact. Through careful storytelling and the innovative use of technology, the campaign becomes a spectacle of powerful visuals that tell the story of why consumers should withdraw from their unethical bank and join The Co-operative Bank instead.”

Hearts & Science is the media agency for the campaign. Rachel Peace, managing director said: “We are incredibly excited to be working with The Co-operative Bank on this meaningful and substantive campaign. There is a paradigm shift happening in our culture as consumers begin to prioritise sustainability and the climate crisis in their choices. Through this multi-touch point campaign, we are positioning Co-operative Bank as a leader in this field by amplifying all the ways they are helping their consumers live true to their values.”