by Roastbtrief
in Brands, Digital
Reading Time: 2 mins read
A A 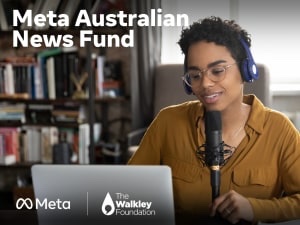 Meta, in partnership with the Walkley Foundation, has launched the second round of the AU$15 million Meta Australian News Fund.

Applications for the funding program are now open, and will be offered to media organisations and independent journalists in two streams:

Preference for both funds will be given to:

“In this second round, funds will be optimised towards digital-first publications and applicants that serve underrepresented audiences in Australia.”

Eligible Australian-based newsrooms and journalists can apply to either or both funds under the Meta Australian News Fund. The Walkley Foundation will administer both funds and will nominate an independent external judging committee to review applications against the funds’ eligibility criteria.

Shona Martyn, the CEO of the Walkley Foundation, said: “I have been excited to see the progress of the journalism projects that were funded in the first round.

“Australian communities and news consumers have undoubtedly benefited as a result. This second round encourages a broader range of applicants and projects with the aim of increasing media diversity and awarding funding to underrepresented groups across Australia.”

Applications for the Meta Australia News Fund close on October 7, 2022, and successful recipients will be announced before the end of March 2023.