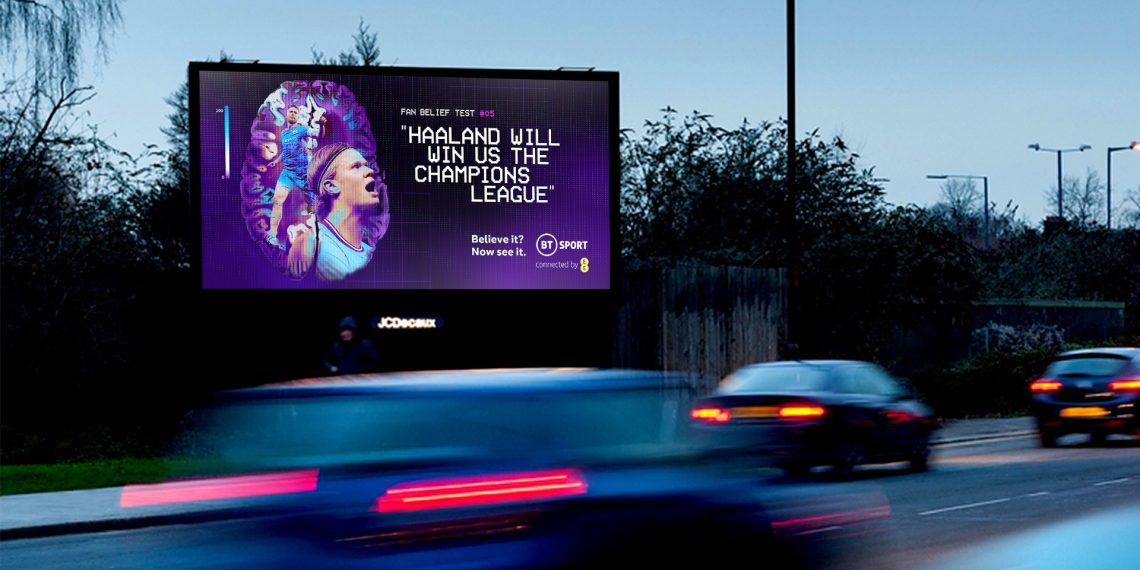 With the new Premier League season just days away, BT Sport alongside Saatchi & Saatchi, today launches a new campaign which uses cutting-edge science to test whether fans really believe their own predictions for the new season.

In Believe It, See It on BT Sport teams up with a leading neuroscience laboratory to test fans’ beliefs and find out if they really do think their predictions will come true, or just something they are saying to be contrary or join in with the pre-season conversation. A team of scientists working with state-of-the-art MRI technology have analysed fans stating their beliefs and the campaign uses the findings to spark some fun, debate, and conversation.

Alongside some of the most passionate fans from each Premier League team, the campaign puts the beliefs and predictions of BT Sport presenters and influencers such as Lynsey Hipgrave, David Alorka & Rory Jennings to explore debates such as: is Saka better than Son? Will Manchester United win silverware? Is Haaland overrated? And, has Super Frank’s revolution really begun? We’ll find out what they really believe.

More details are available at https://www.bt.com/sport/watch/video/clips/2022/july/believe-it-now-see-it-on-bt-sport

Pete Jeavons, director of marketing communications at BT’s consumer division, said: “Believe It, See It on BT Sport is designed to turn the heads of data lovers and tug the heartstrings of team ultras. It creates a connected campaign, born of our scientific test, from social all the way through to digital out of home which is set to fire up debate as we near the big kick-off.”

The campaign has been developed with Saatchi & Saatchi, BT Sport’s agency of record for advertising campaigns. William John, Creative Director says: “When it comes to the start of the season, football fans will believe anything’s possible. There’s boasting, bragging and debating on how it will all play out. We wanted to put those beliefs to the test, to see if fans genuinely believe in their teams or if it’s all bluster.”

This year’s new season campaign follows on from award-winning BT Sport campaigns in recent seasons. These include Unscripted in 2019, where BT Sport leveraged big data in an attempt to script the upcoming Premier League football season, and, Unlimited Subs in 2020 which delved into an alternative reality where teams are allowed to make unlimited substitutions during matches, taking a look at the chaos that might follow.

The campaign launches as a new survey of Premier League fans, commissioned by BT Sport, reveals that while some fans are confident in their predictions, the majority lack the courage of their convictions when it comes to forecasting the coming season.

This coming season, BT Sport will launch a line-up of new, free podcasts and audio documentaries – BT Sport Pods – getting fans closer to sporting icons and providing new insight into great teams, coaches and players. More information will be released soon via btsport.com/pods. In addition, fans can look forward to a new digital show on Saturday mornings allowing our pundits, fans, and journalists to get stuck into the trending topics that week and set the agenda for the weekend.

On-screen, former England internationals and Premier League stars Jack Wilshere and Jermain Defoe will join the BT Sport presenting team, covering action including Premier League and UEFA Champions League. Meanwhile, customers are set to enjoy a bumper line-up of documentaries in the coming weeks, including a look at the challenges faced by elite stars when they retire in After Life, and Glory Hunters, which explores the unique bond between stars and fans through rare memorabilia.