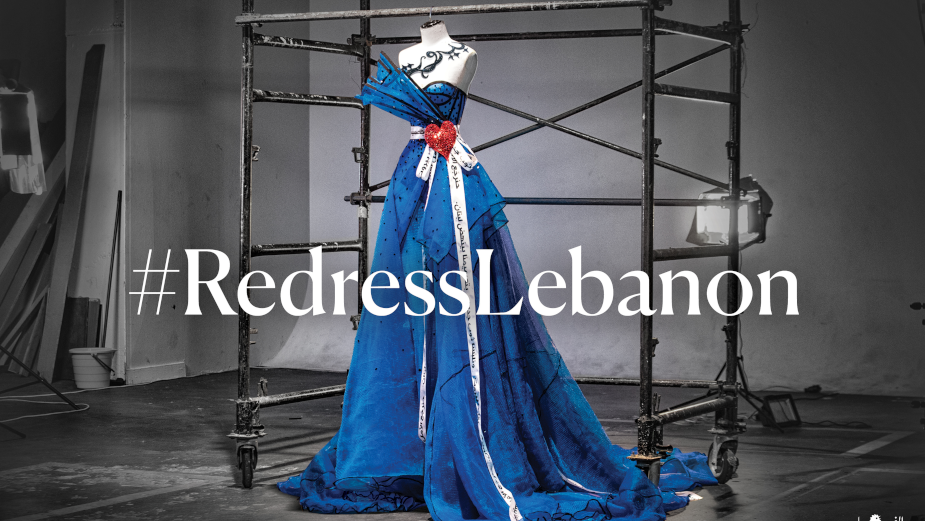 The August 4th 2020 Beirut explosion killed more than 230 people, while injuring and maiming thousands. It damaged an estimated 10,000 buildings within a 3km radius, impacting the lives of more than 300,000 people. It destroyed entire neighbourhoods in seconds, leaving a spectacle of war and destruction in the heart of the Lebanese capital.

In the aftermath of the incident, the urban landscape started to shift, transforming into a massive reconstruction site where scaffoldings and mesh wrapped damaged buildings’ exteriors. Today, two years later, buildings in Beirut are still covered with this mesh, including the AnNahar Newspaper headquarters.

Emanating from the same mesh, AnNahar and IMPACT BBDO launched the ‘#RedressLebanon’ campaign. In collaboration with international fashion designer Zuhair Murad, the campaign makes a bold statement by transforming the fabric of the mesh into an artistic creation, calling for the people to believe again in their country.

Zuhair worked on a design using mesh cut directly from the AnNahar’s building’s exterior. With the dress, Murad aims to embody the resilience, beauty and will power of the Lebanese people in the face of a spiralling economic and social crisis that made their living conditions unbearable. The newspaper headlines were printed on a satin belt, wrapping the waist and cascading with grace. It is held together with a shiny red sequined heart that gives life to the deep blue dress.

A special August 4th newspaper edition was published, narrating articles from various Lebanese personalities including the victims’ families testimonials and their hope for a better Lebanon. The edition was sold or delivered wrapped in the same building mesh.

The campaign included the launch of an initiative to sell 10452 NFTs of the design, a reference to Lebanon’s surface area in km2, with all proceeds going to the ‘Idraac’ NGO, dedicated to raising public awareness and advocating for mental health as a basic human right for the Lebanese population.

Two years to the day after the deadly explosion, it is time to heal the soul and revive the spirit of the fallen nation, which is still waiting for accountability and justice. It is a message of hope for people to keep believing in the true potential of their country. Hope to redress its capital and the rich heritage of its people.