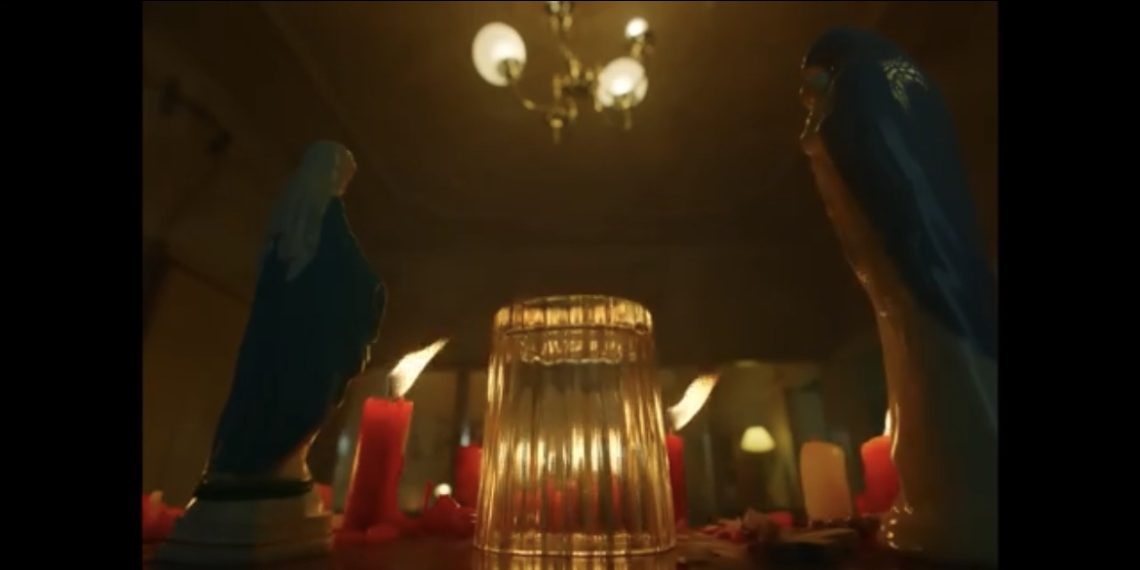 Enshrined within an unstoppable break-out year of accolades, including multiple sell-out tours, U.S. late-night television debut and a recent run of dates across the U.S. and Europe, Genesis Owusu makes his returning statement and stellar follow-up on “GTFO”. A lullaby-like choir warbles on loop like a fantasy film’s opening credits, mysterious and cinematically thrilling, before Kofi unlocks his first verse atop its eerie echo. An unmistakable warmth and spoken word from Kofi leads the track to a bridge and chorus, its analog instrumentation co-written by Genesis and a smaller version of his recording band including Michael DiFrancesco (Touch Sensitive), Jono Ma and OURNESS label founder, Andrew Klippel. Produced by Andrew Klippel, Dann Hume and Jono Ma, and mixed by Spike Stent, the accompaniment shifts with the band leader’s groove, as Kofi yells ‘get the fuck out’ over a marching beat and a crash of cymbals, kept in razor-sharp time

The single comes accompanied by a music video directed by Rhett Wade-Ferrell aka Uncle Friendly. The clip opens to Owusu kneeling in prayer before a candle-lit shrine as he recites the song’s opening lines. After an escaped cockroach breaks his attention, the remainder of the video sees Owusu driven insane as he hunts down the insect, wreaking havoc to the house in the process.

As an exponentially rising talent, Genesis Owusu has defied genre and style to keep the limelight burning following the release of his debut album, Smiling With No Teeth in March 2021. Owusu celebrated its release with a sold-out 22 date tour in 2021 alongside his Goon Club, before another sold-out national theatre tour with The Black Dog Band (his recording band) in 2022. Next, Owusu jetted to the United States for his first ever international tour, performing 16 shows with his Goons. Owusu also made his U.S. late night television debut on The Late Show with Stephen Colbert. He recently embarked on a 13-date European tour with sold-out stops in London, Dublin, Amsterdam and Berlin’s Berghain, as well as performed at Barcelona’s Primavera Sound. After his Splendour in the Grass performance in July, he’s headed back to North America for performances at Lollapalooza festival in Chicago, Osheaga Festival in Montreal, This Ain’t No Picnic in California and Austin City Limits, as well as a string of shows supporting Glass Animals and Khuranghbin across their respective tours. Genesis Owusu then returns to Australia to support Tame Impala on their Australian tour throughout October, before further festival appearances at Spilt Milk, Lost Paradise and Falls Festival.

Owusu’s profound artistic revolution and soul-bearing diversity has seen his debut album, Smiling With No Teeth ushered in as one of the country’s greatest new albums. The album secured triple j’s Album of the Year and x4 ARIA award titles, including Album of the Year, Best Hip Hop Release, Best Independent Release and Best Cover Art, alongside radio support from triple j and BBC Radio, and global acclaim from tastemakers and critics alike, including The Needle Drop, NME, Line of Best Fit, The Guardian, Teen Vogue, Rolling Stone, The Australian, ICON and many more. Owusu additionally saw his album track, “Gold Chains” included in President Obama’s Favourite Music of 2021.

Today, hit play as Genesis Owusu shares his latest track, “GTFO” and invites us once more to the listening party of his innermost thoughts, in which he simultaneously shares his compelling story and unreservedly expresses his truest opinions.