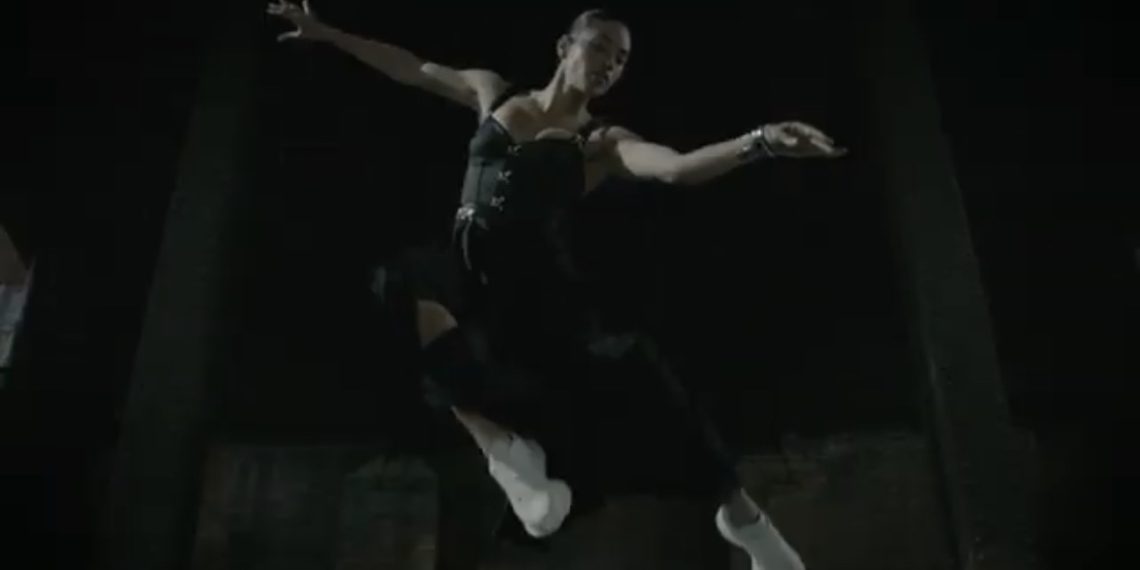 Inspired by Mette’s fiercely beautiful physicality, the film is the ultimate expression of empowerment through clothing. Mette wears a corset dress with oversized silver metal hook-and-eye detailing and an asymmetric drape skirt in both black and tea rose satin. The dresses are teamed with the McQueen Sprint Runner in classic white.

A modern and streamlined variation of a classic running sneaker, the Alexander McQueen Sprint Runner was first seen on the women’s Spring/ Summer 2022 runway. It has a laced, metal free white leather upper and an exaggerated rubber sole. Available in all white with a white counter heel or in white with a contrast black leather counter heel and in seasonal colours reflecting the palette of both men’s and women’s ready-to-wear, all are finished with an Alexander McQueen signature and three-dimensional McQueen seal.

Mettenarrative is a dancer, actor and musician. Having toured with Pharrell Williams, she came to prominence in the music video for Lemon by N.E.R.D., featuring Rihanna. She has appeared as an actress in Hustlers and in The Old Guard and from 2019 and throughout the pandemic Mette focused her talents on song writing.

‘Sprint Trainer’ is the 2nd out of three accessories films directed by Sophie Muller and commissioned by Sarah Burton for Alexander McQueen.

‘Sprint Trainer’ was shot at Wapping Power Station, and PRETTYBIRD Director Sophie Muller worked closely with Mettenarrative, using her prowess as a skilled performer to inspire the creative around the film. The film is about the physicality, rhythm and emotion of movement. Mettenarrative is incredibly powerful and athletic throughout the film, pushing herself to the limit. Beautiful yet authentic and emotional in her desire for physical perfection.

This was achieved by using different camera speeds and angles, whilst capturing the emotions and character of Mette as the object of our fascination.