by Roastbtrief
in Awards and Events
Reading Time: 5 mins read
A A 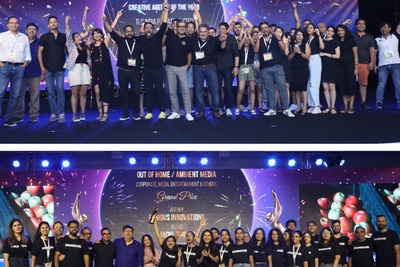 MUMBAI: On day three of Goafest saw the grand finale of the event celebrating the best in advertising, marketing and media industries, with creative minds battling it out at the ‘One Show ABBY Awards’. TLG India (The Leo Burnett Group) walked away with the ‘Creative agency of the year Abby’, along with bagging the ‘Specialist brand activation and promotion agency of the year’ award. The Grand Prix was bagged by Famous Innovations in the Out Of Home (OOH) / Ambient Media Abby category. Good Morning Films won the ‘Specialist agency of the year’ in the video craft category.

In silver awards, TLG India and FCB both won three awards each while the rest of the awards were picked by Sideways Consulting, Cheil India and GREY Group.

This category only had one gold which was picked by FCB Group India and three silver. VMLY&R won one of the silver awards and the other two were picked by TLG India.

In this category, there were four gold and ten silver. The first gold award was won by Enormous Brands LLP for Winkies. The other gold awards were bagged by Mindshare, GREY Group and FCB Group India.

This category didn’t have any gold. It has three silver Superfly Films for Tanishq, Grey Group for Gillette India and FCB Group India for Unaids.

This category had one gold and one silver. Gold award was bagged by VMLY&R for Maxx Flash’s The Killer Pack campaign and silver was picked by Famous Innovations for Livpure’s Cutting Paani campaign.

In this category, there was one gold which was bagged by Grey Group and three silver awards bagged by Havas Worldwide India, TLG India Private Limited and FCB Group India.

In the search subcategory, Famous Innovations bagged a gold for its campaign titled Avoid Humans – Deceit for the Tadoba Wildlife Sanctuary and Irai Safari brand. The second gold in the category was won by TLG India for brand spotify for its campaign ‘There’s a Playlist for that’.

There were four silvers given away in the category, of which two were won by FCB Group India, and two by Famous Innovations.

Cheil India picked up the only gold in Red Abby category for the Mental Health brand.

Cheil India, TLG India and Havas Worldwide India bagged the three silvers in the category. There was no gold Abby in the Still Digital.

The Still Print Abby category saw six silvers, with four won by Famous Innovations and one each by TLG India and Havas Worldwide.

The Young Abby awards category saw FCB Group India pick up a gold for its campaign ‘Can an imaginary girl help’ for Parle G.