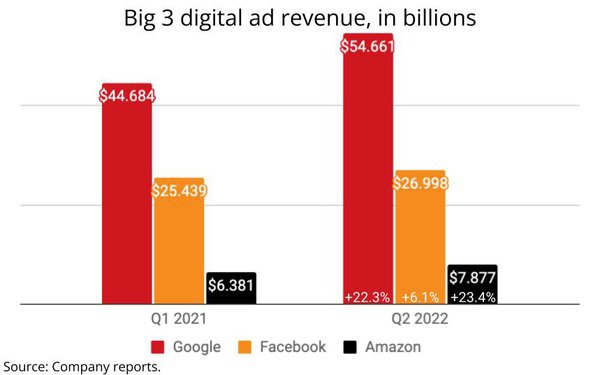 At a time when the ad industry is scrutinizing the “deceleration” of ad spending across major media, Amazon reported first quarter ad revenue of $7.877 billion, an increase of 23.4% over the same quarter in 2021.

That’s the best result of the Big 3 digital media suppliers, beating the growth rates of both Google (+23.3%) and especially Facebook’s tepid 6.1% increase, albeit on a much smaller base.

But Amazon’s ad results are encouraging given that it much of its advertising is tied to ecommerce sales, which were ostensibly impacted by supply-chain constraints over the last quarter.

“That’s a strong run rate compared to [Amazon’s overall] revenue growth rate,” CFO Brian Olsavsky said in response to an analysts question about its ad results during its first quarter earnings call. “So we’re still very happy and pleased with the way the advertising team is performing and how advertising has been valued by both sellers and vendors and others who use it to reach our customer base at the point where they’re considering purchases.

“So a strong quarter and continue to roll out new and new products for sellers to manage their advertising and increase the ability to analyze and calculate the payback on marketing investments with us.”

For its part, Facebook attributed its lackluster ad quarter to “signal loss” from the rollout of Apple’s privacy framework, which has impacted the performance of Facebook advertising for big and long-tail advertisers, as well as fallout from Russia’s invasion of Ukraine.

Facebook’s results, in particular, has sparked concerns about a looming ad recession, but Amazon’s results indicate that even with supply-chain disruption, demand for branding and performance marketing remains strong among ecommerce marketers.

Chewy Celebrates 'May the Fourth' With Contest