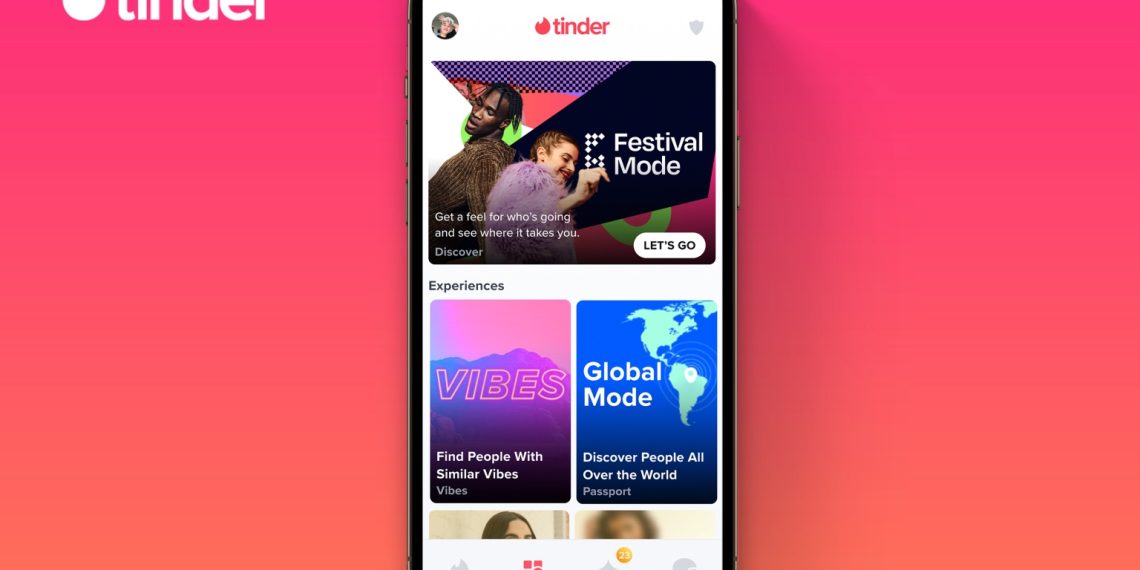 Tinder today is launching a new feature called Festival Mode designed to help users connect ahead of their plans to attend concerts or larger music festivals, like The Governors Ball, Bonnaroo, Stagecoach, EDC Las Vegas and others. The feature was designed in partnership with live entertainment company Live Nation as well as event producers AEG Presents and Superstruct Entertainment, whose upcoming events will now be included in the new Festival Mode feature found within Tinder Explore.

Launched last September, Tinder Explore is the dating app’s home to its growing array of social features, including ways to connect with others based on interests, a quick chat feature that allows members to interact before a match is made and the interactive videos series “Swipe Night,” among other things. The section also serves as a place where Tinder can try out more experimental features without having to revamp the app’s overall design.

As for Festival Mode, the company points to survey data that inspired it to build the new feature. It learned, for instance, that 1 in 3 singles are planning to attend a music festival or concert in 2022, and that 64% of singles said they enjoy meeting new people while attending live music events. In addition, more than 3 in 5 users (61%) said they became friends (or more…) with someone they met at a concert or festival, Tinder says. (Its survey of 2,000+ adults was conducted online in the U.S. by The Harris Poll on Tinder’s behalf during a week in April.)

“Music is a universal language and the number-one interest among Tinder members worldwide. So many of our members are excited to jump back into in-person events. We wanted to build on that excitement and offer them a head start at meeting someone new ahead of one of the biggest festival seasons in years,” said Kyle Miller, VP of Product Innovation at Tinder, in a statement. “Festival Mode gives you a chance to get yourself back out there, meet new people, and make friends before you hit the festival grounds. It’s a great, low-pressure way to make real-world connections again.”

To use the feature, Tinder members will be able to select which of the various festivals they plan to attend and can then begin to match with others who are also going as early as a month before the show. Festival Mode will also include a “Festival Goers” space for those who either don’t see their particular festival listed or who are just generally fans of festival culture and want to interact with others who share their same interests.

The feature will launch with support for 20 festivals from around the world, including Bonnaroo, EDC Las Vegas, EDC Orlando, Hard Summer, Lovers & Friends, Stagecoach and The Governors Ball in the U.S. Internationally, Tinder will offer Festival Mode for Falls Festival, Festival X and Splendour in the Grass in Australia; All Points East and American Express presents BST Hyde Park in the U.K.; as well as Lollapalooza in Paris, Berlin and Stockholm; Parookaville (Germany); Sziget Festival (Hungary); Palmesus (Norway); Sónar (Spain); and Vunzige Deuntjes Festival and Milkshake in the Netherlands.

The new feature’s timing, of course, arrives just ahead of what some hope will be a relatively normal summer, pandemic-wise, as COVID deaths decline. Or, as The Atlantic put it, it will be the “Hot Vax Summer Redux.” (That may not bethe case, however.) In any event, event promoters are expecting concert-goers to return, and Tinder saw a way to capitalize on that.

Festival Mode is one of only a few major new Tinder products to launch following Tinder parent company Match’s miss on Q4 earnings, following behind support for virtual “blind dates” and a background check feature. Though the company pulled in $806 million in revenue in the quarter, led by flagship dating app Tinder, it fell short of Wall Street expectations of $819 million. Earnings per share came in at a loss of ($0.60), compared with $0.50 in the year-ago quarter, and behind estimates of $0.53.