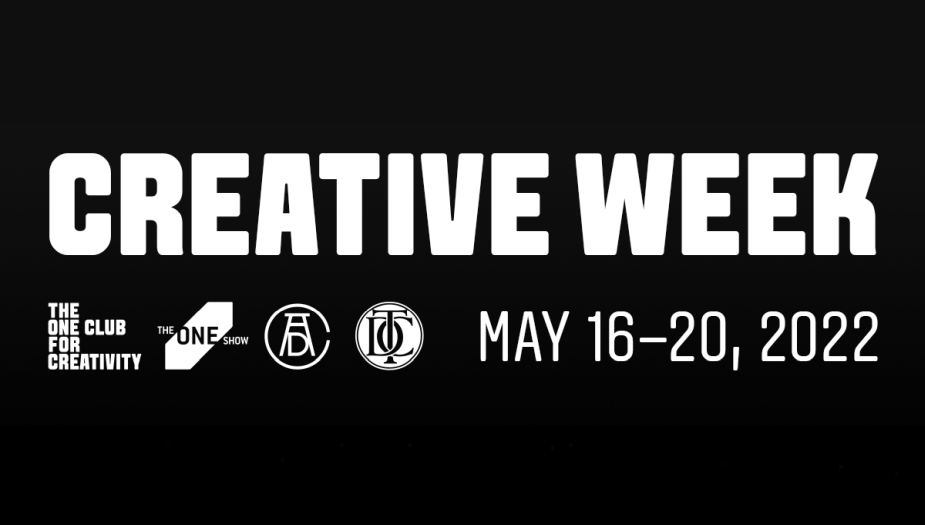 After hosting two years of highly successful virtual awards ceremonies, The One Club for Creativityannounced The One Show 2022, ADC 101st Annual Awards and Young Ones Students Awards will return to in-person events during Creative Week 2022 in New York, May 16-20.

Creative Week 2022 kicks off on the evening of Monday evening May 16 with the Young Ones Student Awards held at Sony Hall.  The Young Ones Educational Festival happens on Tuesday, with an assortment of in-person and virtual workshops and portfolio reviews.

The ADC 101st Annual Awards ceremony takes place Wednesday evening May 18 at Gotham Hall.  In addition to honoring this year’s Cube winners from around the world, the ceremony will also feature a belated celebration of ADC’s historic 100th anniversary, which was postponed last year due to the pandemic, and include important members and winners from throughout ADC history.

The event will also feature a special presentation of the prestigious Manship Medallion, the original ADC competition award created by famed sculptor Paul Manship who made the Prometheus statue in Rockefeller Center, to 10 highly accomplished members of the creative community who have had significant and positive impact on ADC through the years.

Creative Week 2022 concludes on Friday evening, May 20, with The One Show 2022 awards ceremony at Cipriani Wall Street.  The night will include a special tribute to industry legend Tony Gulisano, The One Club’s global chief growth officer who died suddenly on March 25.

To maintain the connection to the global creative communication forged over the past two years with virtual ceremonies, this year’s One Show will include online and live streaming components.  There are also preliminary plans to make The One Show awards ceremony a global celebration, with events hosted by top agencies and media in a half-dozen cities around the world to be announced shortly.

Creative Week 2022 will include interesting sessions hosted by One Club corporate members, a member social gathering, a New York City TypeWalk through different neighborhoods on Thursday hosted by the Type Directors Club, and more to be announced shortly.

“The pandemic didn’t stop us from running our awards programs and celebrating the industry’s best work, as we quickly transitioned to virtual judging, awards ceremonies and festivals,” said Kevin Swanepoel, CEO, The One Club.  “We hope this year to bring the creative community back together in person to celebrate the best work in the world, and will continue to monitor conditions as Creative Week approaches.”

Creative Week 2022 sponsors include Shutterstock, Verizon, and Working Not Working.

Registration for specific events or a full Creative Week 2022 pass is now open.

Coca-Cola Zero Sugar Byte Is A Pixel-Flavored Beverage Coming First To The Metaverse, On Sale IRL In May