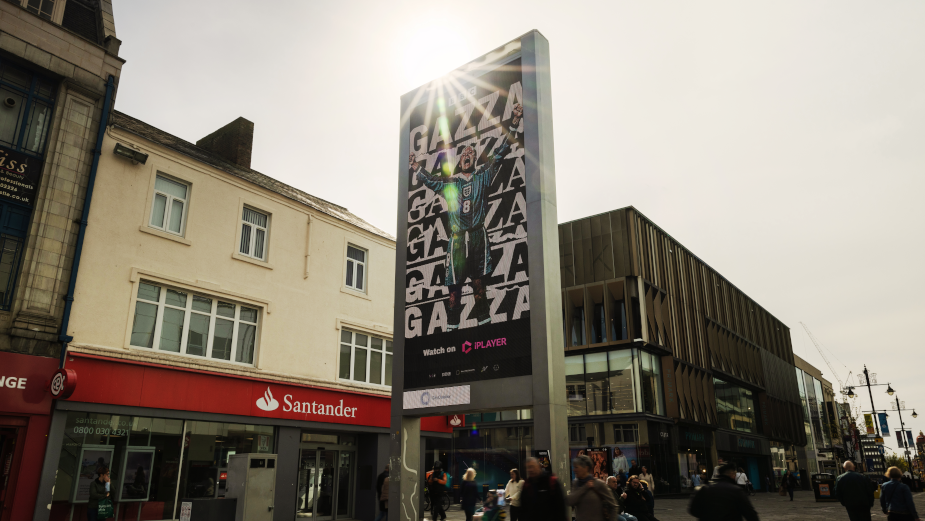 The troubling story of English football legend Paul Gascoinge has been brought back to the spotlight in a new BBC2 documentary miniseries, offering a new perspective into his life and turbulent relationship with tabloids, exec produced by Saatchi & Saatchi ECD Franki Goodwin, with Western Edge Pictures.

Following a primetime run on BBC 2, the acclaimed documentary is now available on BBC iPlayer. To celebrate its release Saatchi & Saatchi has created a poster campaign that will run in Gazza’s hometown of Dunston, Newcastle.

The poster, depicting Gazza against a backdrop of newspaper headlines, was designed by Saatchi & Saatchi and inspired by the relentless press attention that he received. The agency worked with OOH partner City Outdoor to turn around the project.

The documentary focuses on Gazza’s career, from his early days at Newcastle to spectacular moments on the field, following Gazza’s rise to fame, the media scrutiny that surrounded the footballer and troubles that plagued his personal life throughout his career.

Franki Goodwin, ECD at Saatchi & Saatchi and Executive Producer of the documentary said: “It’s wonderful to be able to celebrate Gazza’s roots in Dunston, the response to the show across the UK has been incredible and it feels fitting for Saatchi, WEP and the BBC to be collaborating to promote this story of a British icon.”

CAMPAIGN WAS MADE POSSIBLE BY: City Outdoor

GAZZA, A 2X60’, IS MADE BY: Western Edge Pictures, Haviland Digital and Mark Stewart Productions for BBC Two and BBC iPlayer.