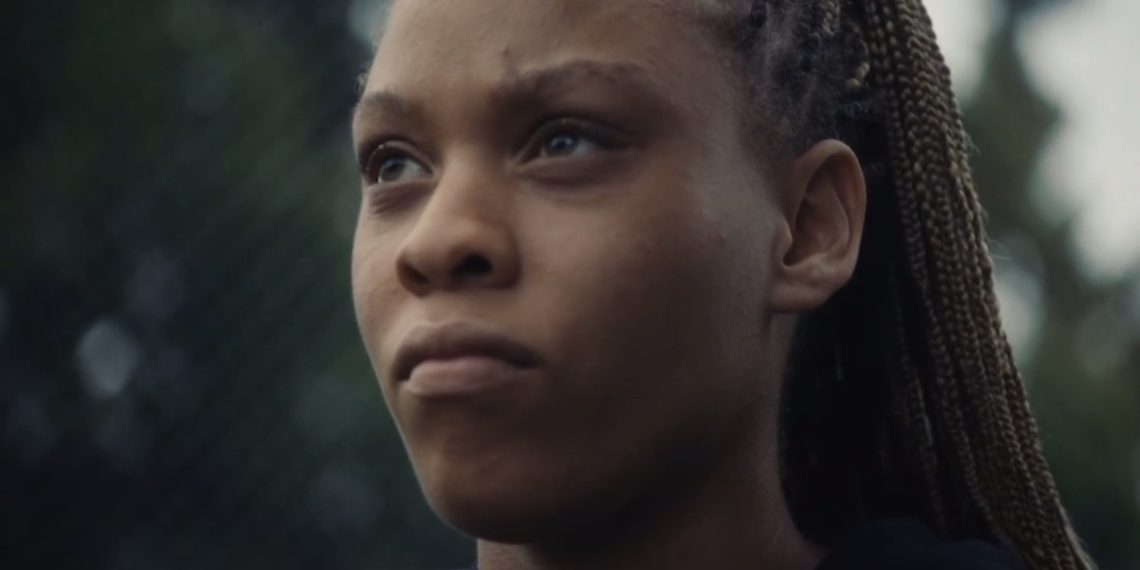 Great Guns’ Suzanne Kim has teamed up with Mitchell & Ness, Philadelphia’s oldest sportswear company, to celebrate an iconic moment of sporting history. 40 years on from Michael Jordan’s 1982 NCAA Championship Game as a freshman, ‘When Mike Became Michael’ celebrates the sporting legend’s last-second basket which set him on a path to stardom – all through the eyes of a teenage girl.

The film, which heralds Mitchell & Ness’ exclusive sale of the iconic 1983-84 Michael Jordan University of North Carolina Jersey, opens inside a home where a girl and her father are seen watching sports. Bathed in a hazy aura of nostalgia, we hear fuzzy commentary of the match play over the action. As the audio drifts in and out, the scene cuts between several shots of the girl’s life – practising basketball alone and with her dad, spending time with him around the dinner table, and watching the game at the edge of their seats. As the atmosphere intensifies, the crowd chanting with increasing passion, we hear them erupt into applause for the final frame: the girl, wearing Michael Jordan’s famous jersey, as the commentator announces the star’s victory.

Agency Andpeople reached out to director Suzanne Kim, known for pursuing narratives anchored by strong female athletes – as well as her love for basketball. The simple yet unorthodox brief asked Suzanne to celebrate the 40th anniversary of the famous moment ‘When Mike Became Michael’ ahead of the auction of his iconic jersey, but through the introspective space of a young female athlete. Working collaboratively with the agency and Mitchell & Ness to elevate the idea, Suzanne opted for a subtle yet experimental approach to the audio and images, with minimal explicit reference to the product and the legendary shot. Whilst non-basketball fans may not immediately grasp what is being alluded to, the film is expertly crafted to ensure that they still get swept up in the passion.

To further immerse the audience in the protagonist’s inner mind, Suzanne experimented with the psychology of audio and music. Creating a vortex of sound with the original 1982 commentary weaving in and out, editor Phoebe Taylor and Suzanne worked to mimic the nature of the character’s mindscape, reflecting thoughts of basketball, Michael Jordan, and the iconic shot marinating in her brain. To compliment the dreamlike approach, the teams juxtaposed stylistic quick cuts with free-roaming documentary-like images, rousing viewers while also giving them the space to feel.

Wanting to present an authentic and natural-feeling family relationship, Suzanne cast actual father-daughter duo Bevon and Gabriela Jaars for the ad. Bringing their behind the scenes playful energy in front of the camera, the audience is granted an insight into their special dynamic, bonding over a shared love of sports. Casting Gabriela also allowed Suzanne to amplify a powerful female story and capture the intersection between femininity and sport, as she has in the past with Running Bare’s International Women’s Day spot.

During the shoot, Suzanne worked closely with the producers and 1st ADs to push the possibilities for the film within the realms of reality. The nimble crew worked to imbue the cinematography with a sense of intimacy, opting for over-the-shoulder, documentary style shots in natural lighting. Suzanne and cinematographer Chris Miles chose to shoot Alexa RAW, allowing them to better handle noise and edge detail, as well granting them more flexibility in altering the mood and look of the film later in the grading process.

Director Suzanne Kim comments: “As soon as I heard the concept for this film, I was hooked. It’s always refreshing when you get to work with an agency and client who completely trusts you and your experimental ideas, and as a result we produced something we all loved. Though it may sound cliché, there’s a reason why we say that the best content authentically conveys a feeling and sells a dream. I want to see the beauty and purpose in the jobs I do, treating them like an art form and diving into their psychology.”

She adds: “Watching sports with my dad is one of my most cherished childhood memories, so the culture of sports is very comforting and familiar to me – it actually feels like home. So, getting to capture that relationship for another father and daughter was very special for me. I understood that playful dynamic, and it only took us a conversation to bond over our love of sports. With it being so real, the pair ended up being naturals in front of the camera, and I’m so glad I got to share that experience with them.”

Oliver Fuselier, MD and EP of Great Guns USA, says: “Suzanne Kim’s work has continually grown, as a director with a strong point of view in every creative way. What a great way to tell this story, starting with a girl bonding with her father over sports – as Suzanne did – to this emotional and complex story of how 32 seconds changed so many lives. I am so excited to see what Suzanne will bring us next.”