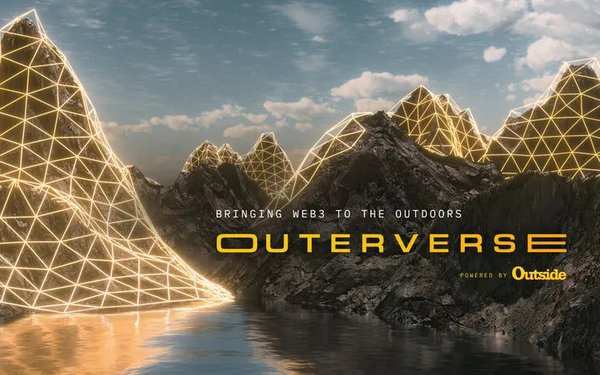 Worried about Web3 jettisoning the great outdoors? You may be in luck.

On Monday, Outside Interactive –– the Boulder-based parent company of health-and-outdoor-focused media brands like Outside magazine, Vegetarian Times, and ski film production company Warren Miller –– announced plans to launch the “Outerverse,” an adventure and wellness-centric alternative to the looming metaverse.

The Outerverse, built in partnership with crypto company SuperLayer.io, will consist of an NFT marketplace (Outside.io), a creator platform, and an Outside-branded loyalty token that rewards users for getting outdoors.

Robin Thurston, CEO of Outside, believes that NFTs, cryptocurrency, and Web3 systems can be “game-changing” for media, depending on how they are used.

“Big Tech wants you to live a virtual life; we’re creating experiences and content that will help you live a real life,” says Thurston. “The Outerverse is a place where technology exists to fuel adventure, inclusivity, and sustainability.”

The project will officially launch in June with the release of the Outerverse Passport, a limited-edition NFT that promises buyers rewards, including a piece of unique digital art, early access to future Outside.io NFT mintings, and a three-year subscription to Outside+, the company’s subscription product.

In addition, Outside will offer rewards to NFT owners who take part in specific activities, including “peak-bagging, trail maintenance, new personal bests, sleep, and even meditation.”

Outside also says that it will be collaborating with artists and brands who will produce collectibles that celebrate its audience’s favorite athletes, destinations, and races.

Some time after June, Outside plans to transform its NFT marketplace into a place for writers, photographers, and creators to publish their own work.

The company will donate 20% of the net revenue from the sale of every new NFT to a select group of nonprofit partners focusing on sustainability and diversity, equity, and inclusion.

By running on Solana, a low-energy proof-of-stake blockchain, Outside says it will take additional steps to neutralize 100% of the footprint of the Outerverse.

Twitter's Price Jumps 25% On News That Musk Has 9% Share

Why is the Qantas campaign so good?