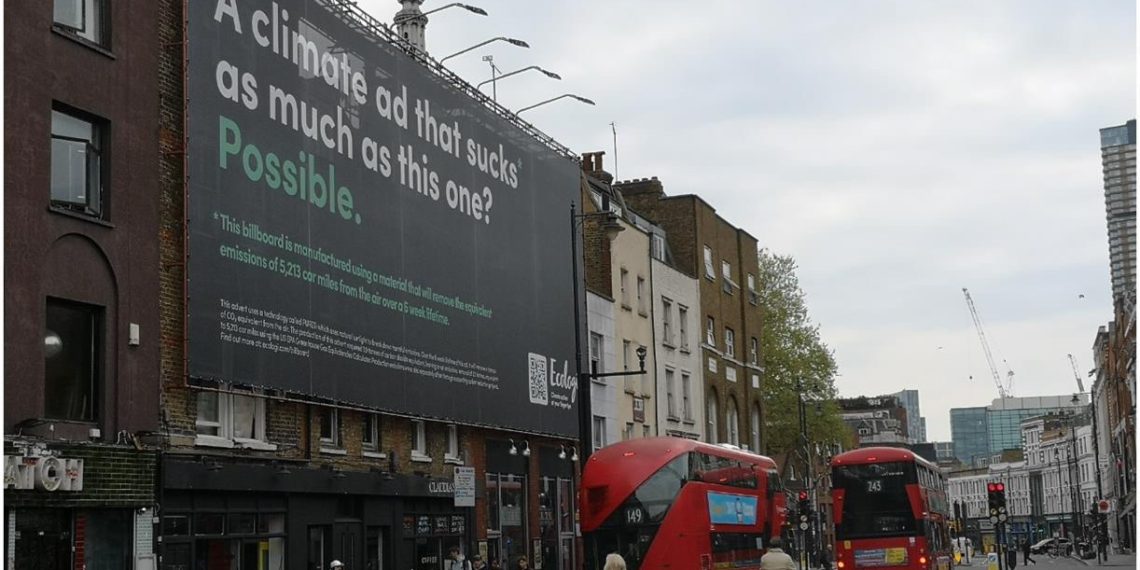 Ecology has debuted a carbon drain sign on Kingsland Road, Shoreditch, as part of its new Earth Day (April 22) campaign, entitled “The power of possible”.

A campaign planned by the media agency Electric Glue and designed by the creative agency Enviral, the sign measures 161 m² and will absorb four tonnes of CO2 from the air.

It reads: “A climate ad that sucks as much as this one? Possible.”

According to Ecologi, the sign will leave a net emission of 2.1 tonnes, after having reported production emissions.

The brand worked with blowUP Media to produce the banner and will use a technology called Pureti that uses natural sunlight to break down harmful emissions.

The sign will be appears from April 18 to May 29 and can remove up to 40% of the pollutants it comes in contact with.

After six weeks, PVC waste from the sign will be burned at high temperatures to generate superheated steam to power a turbine and produce electricity.

The agency will also launch a TV commercial for Earth Day, with Dragon nestinvestor Steven Bartlett.

The ad shows Bartlett holding a monologue for the camera about collective action against climate change, when a group of people walk behind him.

He says: “People say we can not tackle the climate crisis alone, but we believe it is possible if we work together.”

The ad ends with the Ecology logo and the slogan: “Climate action at hand”.

Adam Boita, Marketing Manager at Ecologi, said: “We want to show how the media can be a force for good.

“By harnessing the power of collective action, we can turn climate change together.”

Reinforcing the Value of Good Comms for Small Charities