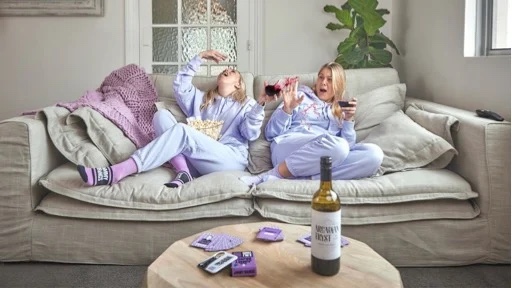 It is April Fool’s Day and Dr Mumbo is loath to report that brands are at it once again. Dr Mumbo is fully aware that by writing this article Dr Mumbo is only encouraging them.

People say listicles are lazy journalism, and Dr Mumbo agrees. Anyway, here’s a listicle of some of the April Fool’s Day pranks in Australia. Except for the Dyson air-purifying headphones, which apparently are not a joke at all.

ME Bank and Volley pair up for hands-free, feet-first payment method

It’s a credit (Or is it debit? Doesn’t matter, it’s not real) card on the bottom of a shoe.

ME’s chief marketing officer Ingrid Purcell said: “When ME customers use VolleyPay to purchase their daily coffee, the family shopping or a romantic meal, the technology will allow them to kick, dance and pay in a fashion-forward way.”

Skittles and M&M’s – together at last

Dr Mumbo understands this is a joke product. However, Dr Mumbo now cannot stop thinking about how this would taste and will now have to use Dr Mumbo’s lunch break to try this out.

Alcohol delivery service Jimmy Brings has announced a “wine proof” tracksuit, although it is not clear if the fabric is resistant to any other liquid. Dr Mumbo would like to request an extension of the product line to include a toothpaste that actually gets rid of red wine stains on teeth.

Jimmy Brings head of marketing Jesikah Boatfield said: “We’re delighted to announce the release of the ‘Wine Proof’ tracksuit. People are often nervous about red wine because it stains so easily. Now all Australians can sip in style without a worry!”

SEEK reads the room, gets an office on Mars

With the way Sydney weather has been going and the general climate change emergency, Dr Mumbo may visit the new SEEK offices on Mars.

The travel company is offering the opportunity to parachute from one of its seats to traveller’s destinations.

When you go to the website to check out the deal, a pop-up reads: “We asked legal and they said we’d have a lawsuit on our hands if we pushed people out of planes.” Bummer.

More Aussie than a cold beer on a hot day: TimTams and Vegemite

TimTam and Vegemite have collaborated to release Vegemite flavoured TimTams.

An intriguing concept, although Dr Mumbo much prefers Marmite.

If any of the above are not, in fact, April Fool’s Day jokes, Dr Mumbo suggests to not send press releases with an embargoed date of the first of April.

This article has been updated because of course it has been.

Second update: Dr Mumbo appreciates the PR hustle but as it is Friday no more April Fool’s Day jokes will be added to this article. Dr Mumbo is off to the pub.

Tesco Mobile: shopping trolly embarks on quest to save consumers from rivals