by Roastbtrief
in Advertising, Brands
Reading Time: 5 mins read
A A 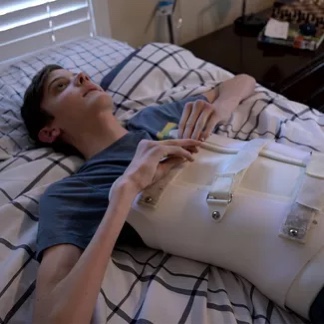 Gamers Outreach is partnering with Xbox and McCann London to present “Beyond Xbox: Therapeutic Play” an initiative that aims to use gaming to help aid the recovery process for children who spend long periods of time in hospital.

A documentary film entitled “A Player Like Me”, created by Xbox and McCann London, celebrates the power of connections in hospitals with the introduction of Jordan, a 14-year-old from Atlanta who is living with an extremely rare strain of Ehlers-Danlos Syndrome – and has spent most of his childhood years in hospitals and physiotherapy. Jordan had never met anyone with Ehlers-Danlos Syndrome before, however, that all changed when he met Megan, who lives in Scotland, through gaming on Xbox.

The film showcases the friendship that Jordan and Megan forged through a gaming session. Despite the 3,935 miles between them, Megan has mentored Jordan and offered words of encouragement, advice and guidance whilst racing cars through the virtual world of Forza Horizon 5 – an experience made possible through gaming.

“It was really nice to talk to someone who understands (Ehlers-Danlos Syndrome),” Megan said. “It didn’t matter that Jordan and I had age differences or are in different countries, we could relate to each other’s experiences.”

“I was in shock when I found out that Megan had Ehlers-Danlos,” Jordan shared. “One thing I took away from talking with Megan is that if I have a passion to do something, I shouldn’t ignore it just because it seems impossible.”

Zach Wigal, founder of Gamers Outreach says, “Our organization works to empower hospitalized families through play. Each year, millions of kids and teens receive medical care inside hospitals, and for many, the process can be scary and isolating. During hospitalization, kids lose access to friends, school and moments that typically define childhood. We’re on a mission to change their experience.”

Gamers Outreach supplies children’s hospitals with specially designed ‘GO Kart’ systems (Gamers Outreach Karts) which enable patients to connect with friends and family through gaming. The bespoke ‘GO Karts’ come complete with an Xbox console, screen, controllers and games – all integrated within an entertainment station that can be wheeled to hospital beds for patients to play.

Wigal, says, “Through the years, our programs have been a source of comfort and connection for kids and teens during treatment. Gaming enables activities and social connection in ways that can support the healing process. In many instances, we’ve seen games assist health workers during procedures. Video games can help lower fear by providing a distraction.  We want every hospital to be equipped to easily provide kids with their favourite activities. Our partnership with Xbox supports that effort to make gaming readily accessible.”

Michael Flatt, director – Global Integrated Marketing at Xbox says, “At Xbox, we believe that play is a fundamental human need. We’re proud to support Gamers Outreach and to bring the fun, creativity and connection of gaming to children to help support them during their recovery. ”

Jamie Mietz, Executive Creative Director at McCann London says “…the shared activity and nature of playing Xbox breaks down the initial barriers when meeting new people, and spending just a short period of time gaming and chatting to someone going through the same struggles as yourself can be extremely therapeutic”

The film launches on Xbox social channels and Gamers Outreach blog on 28 March and aims to shine a light on children across the world who spend time in hospital – and how gaming can help act as an additional therapeutic tool whilst providing a way to play and connect with friends and family, inspiring joy in their lives.