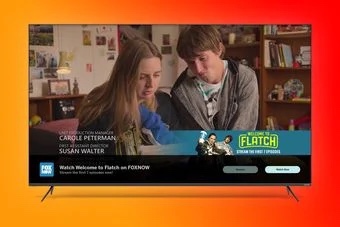 Fox will be the first partner of ‘jump ads’

Vizio is looking to help content programmers drive viewers from linear TV to streaming platforms without having to exit an app or go searching for content.

Dubbed “jump ads,” the new ad format looks to resolve viewer frustration arising out of having to navigate between different streaming services and apps. Fox is the first content partner to try the ad format, which debuted during the TV premiere of its new docu-comedy “Welcome to Flatch” earlier this month. The network will continue to run the ads during the show’s airings on linear TV.

“Jump ads” allow brands to place interactive overlays during linear TV programs, which will direct viewers to streaming apps that are supported by Vizio’s SmartCast operating system. Fox’s “jump ads,” for example, encourage continued viewing of “Welcome to Flatch” by linking to its content inside the Fox Now app, where the first seven episodes are already available.

Vizio said “jump ads” allow brands to customize when the ads will run during the show, the frequency and the SmartCast apps to which they direct. Vizio is currently working on integrating the software with additional content providers and brands, who will have the ability to drive viewing to different apps or content hubs that are presented by brands.

“Clearly, the viewing experience has changed, with both linear and streaming playing an integral role for the foreseeable future,” said Natalie Park, senior VP, marketing strategy and media at Fox Entertainment, said in a statement. “Innovations like Jump Ads that integrate these formats for viewers create a better live, tune-in experience that caters to the on-demand expectation that the binge-watching cultural phenomenon has created.”

Like other TV makers, Vizio has been pushing further into the advertising space in recent years. During last year’s upfront negotiations, Vizio reported it brought in more than $100 million in advertising commitments, a four-fold increase from the year prior.

Vizio has looked to increase its ad inventory via WatchFree+, a platform of more than 250 FAST (free ad-supported streaming TV) channels that complements its other ad innovations, such as the introduction of so-called “sponsored content hubs” on its SmartCast home screens.