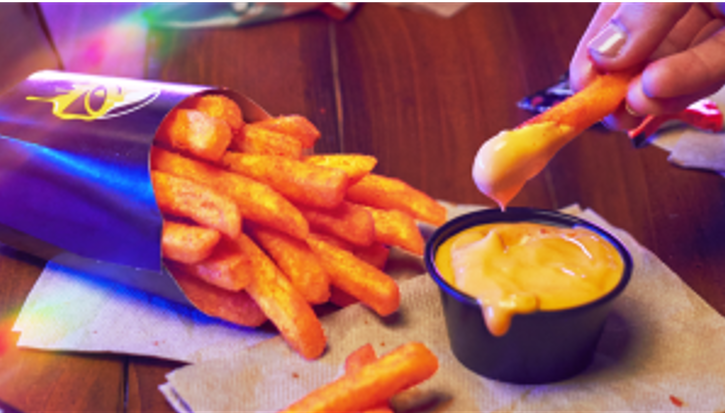 Making a timely return like no other, Taco Bell has announced the upcoming limited-time return of the Nacho Fries by inviting their loyal fans into the writing room – or ‘the thread’, calling for submissions via the ‘Taco Bell’s Nacho Fries Challenge‘ on Twitter to help build their latest campaign “Fry Again.” Engaging fans to help crowdsource the concept for the trailer using the hashtag #FriesChallenge, this unique process created a sense of community that became larger than the project at hand.

Taco Bell Rewards members are getting the first dip with early access starting today to March 9, exclusively on the app from 11am-1pm. Inspired by the faux-trailer itself, Taco Bell is inviting fans to celebrate offering Rewards members free a la carte Nacho Fries (with a minimum $1 purchase) from March 24 to March 26. To continue the infinite time loop experience, Taco Bell is partnering with Grubhub to offer free fries (with a minimum $15 purchase) starting March 27 until April 13.

“We’ve explored tons of genres for Nacho Fries over the years, but this may be my favorite yet because it gave our most loyal fans a front row seat to co-create one of our biggest fan led campaigns ever,” says Taco Bell’s SVP Global Brand Creative Tracee Larocca. “With the bar set this high, who knows where we’ll take Nacho Fries next.”

The plot alone wasn’t all that fans had a say in. In collaboration with the brand’s 1.9M Twitter followers, “Fry Again” was produced in partnership with creative agency Deutsch LA, fans helped with elements from choosing to name the main character “Vanessa”, to selecting the type of sports car she would be driving. Taco Bell engaged fans via creative polls on Twitter and Instagram to determine the main character’s outfit, sidekicks, all the way down to naming her dog, “Baja.”

“This campaign is a great example of how a simple shift in the power dynamics between fans and brands can generate unparalleled results,” says Deutsch LA’s Creative Director Lincoln Lopes. “This idea was born from the belief that brands, no matter how big they are, should be nimble enough to ride culture at its same speed.”

Taking the ideas of fans and using them as building blocks, Taco Bell and Deutsch LA tapped Oscar-nominated director Shawn Baker to produce the upcoming full-length spot. This unique two-fold moment created a dialogue between the brand and their fans, and even garnered the attention of the Vanessa Carlton. The interaction was completely organic and based solely on fans’ willingness to engage with the story.

“When we started the process of bringing this nontraditional idea to life, we had one mantra: Either we run our Nacho Fries thread organically, or we go for another idea.” says Deutsch LA’s creative director Felipe Machado. “Our biggest challenge, though, was to award the job, get a director on board, and start the whole production process without having a script because we were co-creating it in real time with the fans. But that all also becomes easier when you have a strong group of people from the agency and the client by your side.”

Crazy how far you can go with one tweet, huh? While the thread is still active, the story will continue to evolve following the launch of the full-length spot, fans will be able to get Nacho Fries a la carte for $1.49 or in a Nacho Fries Box for $5.49 which includes Nacho Fries, a Beefy 5-layer Burrito, Crunchy Taco and a medium drink.

Follow along as Taco Bell continues to unveil more supremely delicious surprise this year and showcase the power of the ‘bong’.

IPG suspends operations in Russia, following in the footsteps of WPP, Accenture