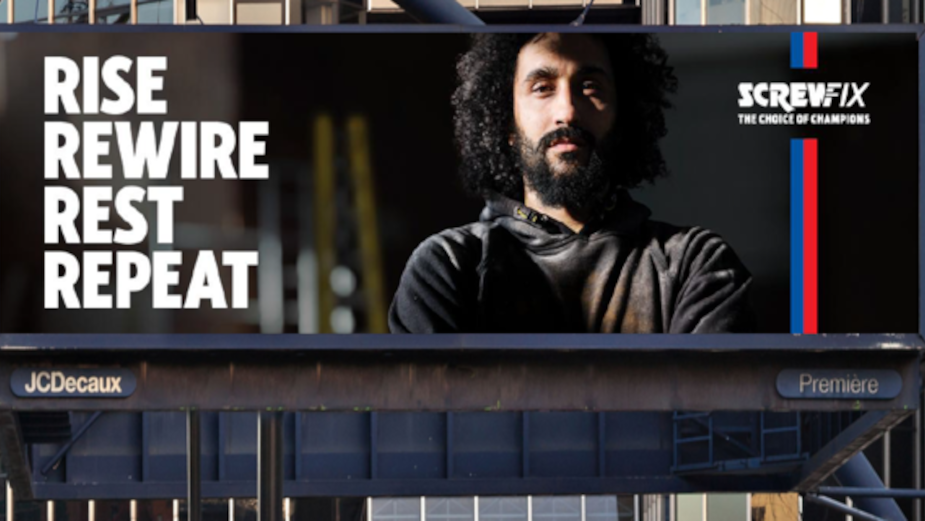 Wavemaker and Screwfix have collaborated on a new creative campaign, “Screwfix, The Choice of Champions,” which reveals a complete refresh of the Screwfix brand identity designed to connect the UK’s largest multi-channel trade retailer with its core trade audience.

The creative developed by Chime 360 celebrates real tradespeople by highlighting the high level of skill and effort that goes into a typical day of work or project. In doing so, the brand aims to further cement its commitment to supporting the trade community – its ‘champions’.

Designed to disrupt the category and support its market leading position, Screwfix has also revamped its visual brand identity in line with this new era appearing across several of the biggest sporting and entertainment events on TV. This includes the Guinness Six Nations and the Emirates FA Cup on ITV, as well as Channel 4’s Gogglebox.

In addition to the TV spots, the new Screwfix campaign will also be visible on the ground through impactful large format digital OOH. From plumbers and electricians to painter decorators, the bold creative will feature typography such as “No drain, no gain” and “Rise, rewire, rest, repeat,” reflecting a range of skilled trades, as well as their respective dedication to the job. The activation will run across the UK until the 30th April and include multiple sites in major cities such as London, Birmingham, Manchester and Liverpool.

As well as its core trade audience, Screwfix is striving to engage the future generation. Following insight and running in parallel will be new activations on Twitch and Youtube to build awareness and showcase the brand’s quality offering to the skilled tradespeople of the future.

The new positioning will be fully integrated across all the brand’s platforms. “Screwfix, The Choice of Champions” messaging will also be interwoven throughout the website, promoting ‘Champion Deals’ on its trade tools, accessories and hardware products.

Jack Wallace, director of marketing, Screwfix said: “Our customers are champions. We wanted to create a campaign that showed their skills and dedication by putting them front and centre. We wanted to celebrate the critical role our customers play in making, fixing, maintaining and building by celebrating them for the super tuned professionals that they really are. We’re incredibly proud of ‘The Choice of Champions’ and thanks to Wavemaker we’ve been able to bring our customers talent, focus, skill and dedication to the fore.”

Louise Temperley, general manager, Wavemaker added: “It’s always a pleasure to work with Screwfix, as they thrive on the chance to do things differently. “Screwfix, The Choice of Champions” is unlike any other campaign in the category. It truly focuses on identifying who its customers are and where they are, in order to resonate with them in a meaningful way. It’s a complete reflection of the brand’s approach to its customers, as well as the relationship it hopes to build with them now and in the future.”

Wavemaker was responsible for all media planning and buying, while creative agency Chime 360 led in the creation of all campaigns assets across TV, OOH, display and social.