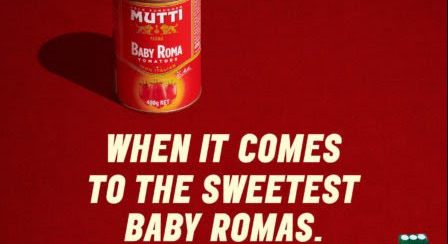 ‘Mutti. When you know, you know’ aims to disrupt the tomato category, encouraging consumers to questions everything they know about tinned tomatoes and positioning Mutti as the premium choice.

The new platform is based on the consumer insight for the category, which tends to be dominated by Italian cliches and generic flavour and quality claims. Unlike regular preserved tomato consumers, Mutti’s customer base is loyal and hold a deep passion for the product.

The campaign will run across TV, digital, social, proximity OOH and POS and includes two 15-second TVCs that dramatise the obsession of Mutti customers in lavish scenes.

In one spot, a woman paints an ancient Grecian-style portrait of a half-naked man who lies across a table draped in red silk cloth and ripe tomatoes, and a single tin of Mutti tomatoes. The artist, who is clearly tasked with painting the man’s portrait, is instead revealed to have painted a portrait of the Mutti tin. The visual is accompanied by an Italian accented female narrator who says ‘most people won’t understand your love for Mutti tinned tomatoes. But then again, who wants to be most people’.

Commenting on the new campaign, Special creative director Lea Egan said: “Most people do not care much about tinned tomatoes. It’s not a topic of conversation. But Mutti is genuinely different.

“We aimed to set it apart and make people rethink this simple, staple product by giving it a surprisingly sophisticated personality.”

Mutti ANZ marketing manager Charlotte Buswell added, “we are very proud of this category breaking work, developed by the Mutti Australia team, in collaboration with Special.

Not only is it brave and fresh, but it really taps into the consumer insight that is unique to Mutti in the category – that our loyal consumers have a deep and real passion for our products because of their superior quality and taste.

IPA teams up with Epic Games to fuel metaverse creation

Why Metaverse may supersede the internet

Why Metaverse may supersede the internet

Can brands stay safe in the metaverse?