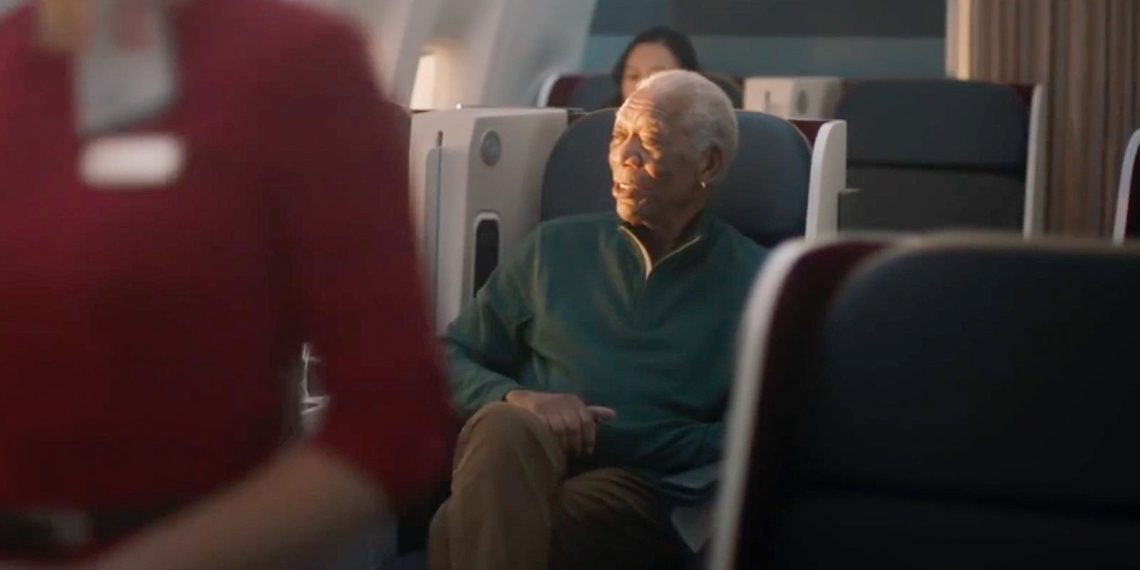 Turkish Airlines (THY) has signed the actor Morgan Freeman, known for playing celebrated roles such as Nelson Mandela, the United States president and Batman’s gadget guru, to represent its brand.

The Oscar-winning actor is lending his sonorous voice and trusted presence to THY’s latest ad campaign, focusing on the theme of the prehistoric supercontinent of Pangea, the company announced Friday.

“On the heels of a successful year of increased demand and recovery for the airline industry, Turkish Airlines is launching a new global advertising campaign,” the company said in a statement.

“Centered around the concept of Pangea – which millions of years ago was a single connected supercontinent – the campaign stars Morgan Freeman narrating a captivating, inspiring message about reunification and the reconnection of people and their worlds,” it added.

According to the statement, the commercial is set to debut online on Feb. 10 and will air during the Feb. 13 American Super Bowl, a high-profile spot traditionally used for maximum impact and exposure.

“The campaign’s concept pays homage to Turkish Airlines’ extensive connectivity as the global carrier that flies to more countries than any other airline, offering a ‘We are all connected’ message as the world prepares for a bright and promising future,” said the air carrier.

“While today Pangea no longer exists, Turkish Airlines is proud of reconnecting people with their loved ones and fostering this sense of reconnection, as the global airline bringing more people and countries together. Through this new campaign, the leading carrier is powerfully communicating its objective to ‘make far feel close’ and ‘bring there to here.'”

THY CEO Ahmet Bolat, whose comments were included in the statement, said, “After months of creative ideation and production, we’re glad to share our Pangea campaign that features Morgan Freeman with the world during the most watched sporting event on the global calendar.”

The ad’s television debut will come during the second quarter of Sunday’s Super Bowl LVI.

“Travelers are increasingly hopeful and enthusiastic to safely explore new destinations or reunite with loved ones, and as a leading global airline, we hope to spark inspiration and instill confidence as we strive to reconnect the world,” Bolat added.

Freeman was also featured in the airline’s 2017 campaign. “With this project again, Freeman lends his talent to the production, captivating audiences with his strong narrative presence and iconic voice,” the statement added.

The campaign began production last September, and it was shot in Istanbul and New York, with striking scenes from some of the many countries Turkish Airlines offers service in.

“In addition to live action footage, the commercial also features computer-generated animation scenes that depict continents and landmasses reconnecting to illustrate Pangea in an arresting and visual way,” the statement noted.

The advertisement will air in 136 countries during one of the most-watched sports events alongside some of the most recognizable brands. This will be the brand’s sixth ad to be featured at Super Bowl.

Turkey’s national flag carrier’s other ad campaigns include 2016’s “Fly to Gotham and Metropolis City,” part of the carrier’s “Batman v Superman” campaign; 2017’s “Widen Your World,” in which Freeman invited viewers to explore its vast route network; and 2018’s the “Five Senses” campaign starring celebrity physician Dr. Oz, who experienced the wonders of the world through five senses.

Oscar-winning director Ridley Scott directed the 2019 Super Bowl commercial “The Journey,” a cinematic and thrilling chase through the stunning sights of Istanbul and the new Istanbul Airport. Lastly, “Step on Earth” aired in 2020.

The Turkish flag carrier flies to more countries than any other airline, flying to 334 destinations across 128 countries in five continents, according to the company.

Roses are red, oceans are blue, we adopted an Octo just for you!

Roses are red, oceans are blue, we adopted an Octo just for you!