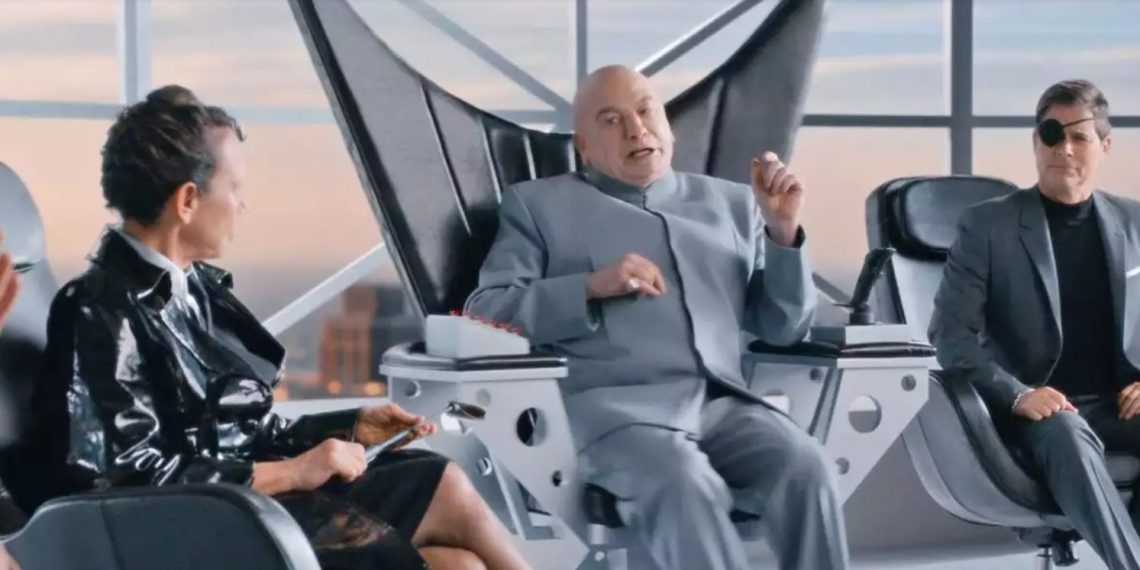 Dr. Evil might just be Dr. Good after all.

Mike Myers reprises one of his Austin Powers characters — and reunites with costars Seth Green, Rob Lowe and Mindy Sterling — in a new Super Bowl ad for GM that sees Dr. Evil agree to save the planet from climate change before trying to take it over.

“It’s a very, very positive message about saving the world,” Myers, 58, tells PEOPLE exclusively about why he signed on for the commercial featuring the GMC Hummer EV SUV and Pickup, Cadillac LYRIQ, Chevy Silverado EV and BrightDrop EV600. “I was like, that’s a positive message for my three kids, so I’m in.”

Growing up in Canada, Myers doesn’t have the same appreciation for the Super Bowl as Americans.

“I marvel at how the world in America stops. It feels like when the Beatles were on The Ed Sullivan Show, and that’s kind of exciting,” he says. “I love the whole spectacle of it, the halftime show. It’s just such fun Americana.”

Since the last Austin Powers installment, Austin Powers in Goldmember, premiered in 2002, Myers and his wife Kelly Tisdale welcomed son Spike, 10, and daughters Sunday, 7, and Paulina, 6.

Working with Green, 48, Lowe, 57, and Sterling, 68, again after two decades “was like we hadn’t missed a beat,” Myers says. “It’s like it was five minutes ago. After three kids I don’t have a sense of time anyways.”

The former Saturday Night Live cast member says he stayed in touch with his costars over the years and talks of a reunion or another movie always came up. To that Myers says, “I love doing the character. I love these people. And you never know.”

Myers doesn’t break into his beloved characters off-screen, though. “I save it for the camera,” he says. “I’m actually quite reserved when I’m not performing. I always call myself a site-specific extrovert. I’m much more extroverted when I’m performing than I am in life.”

Still, the Emmy winner calls it “unbelievably flattering” when Austin Powers fans come up to him in real life and quote lines from the comedies.

“It’s absolutely gratifying,” Myers continues. “It’s people of all ages and from around the world. It’s hard for my head to take in sometimes, but it’s just a great experience. The Dr. Evil speech, when he’s with Carrie Fisher — ‘the details of my life are quite inconsequential…’ — I’ve had people recite the entire speech. And me going, ‘God, I had to do that in 15 takes.'”

Myers knows fans see him more sporadically on screen these days, but he likes it that way. “I have a public life and I have a very, very private life. I go between the two, and it’s always satisfying and gratifying,” the actor, who stars next in Netflix miniseries The Pentaverate, says. “It’s exactly the level of busyness and private time that I love. I’m happy.”