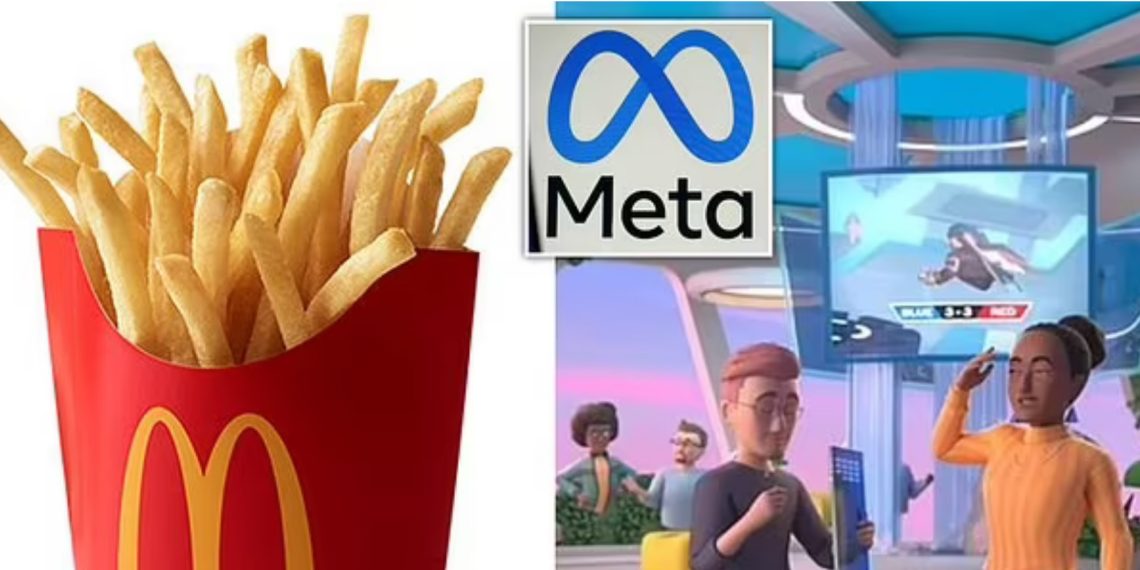 It’s the point at which megabytes become real bites!

Trademarks have been filed by the world’s largest fast-food restaurant chain to set up a location in the metaverse.

McDonald’s, which has more than 39,000 locations in about 100 countries, claim they will be able to deliver food in person and online.

The company filed 10 applications with the US Patent and Trademark Office earlier this month for the McDonald’s brand and McCafe.

Virtual restaurant will be able to deliver food in person and also digitally online. Facebook’s ‘Horizon Worlds’, pictured, is an example of a metaverse, where users can create avatars which mimic their real-life speech and movements and interact with others in a digital space

On closer inspection the trademarks show they are for’ virtual food and beverage products.’

Another describes it as ‘operating a virtual restaurant online featuring home delivery.’

Other brand offshoots such as entertainment and events using the McDonald’s and McCafe names have been trademarked and include ‘online actual and virtual concerts.’

‘You are hanging out in the metaverse and get hungry. You don’t have to put down your headset. You walk into a McDonald’s and place an order. It arrives at your door a little while later,’ trademark lawyer Josh Gerben, tweeted together with descriptions of the trademarks.

It will now take around eight months before The US Patent and Trademark Office likely approved the request.

‘I think you’re going to see every brand that you can think of make these filings within the next 12 months,’ Gerben told Forbes. ‘I don’t think anyone wants to be the next Blockbuster and just completely ignore a new technology that’s coming.’

Facebook (now known as Meta) has already opened up its metaverse world, Horizon Worlds, and Microsoft plans to open up a metaverse version of its Teams app soon.

Smaller companies can get in on the action too, by buying their own space on ready-made metaverse platforms such as Sandbox, Decentraland and Mirandus.

Many are doing so now in order to stake their claim, before figuring out how to actually use this new technology for their benefit.

Panera Bread filed a trademark for the ‘Paneraverse’ last week.

A Metaverse Studio has been established by Nike which has also filed patents for virtual assets.

Other forward-looking brands including Walmart, Crocs, Microsoft and Gucci which have also plans to be present in this new digital world.

At the moment the metaverse is mostly being used for gaming and socializing, as well as the odd work meeting.

‘Land’ in the metaverse is a digital piece of real estate that companies or individuals can buy, and then populate with games or other assets.

The plots are bought as non-fungible tokens or NFTs, making them unique, tradeable digital assets, the ownership of which is recorded on a blockchain.

Metaverse’s detractors claim it is no more than a marketing gimmick for many firms and say its useful applications are limited.