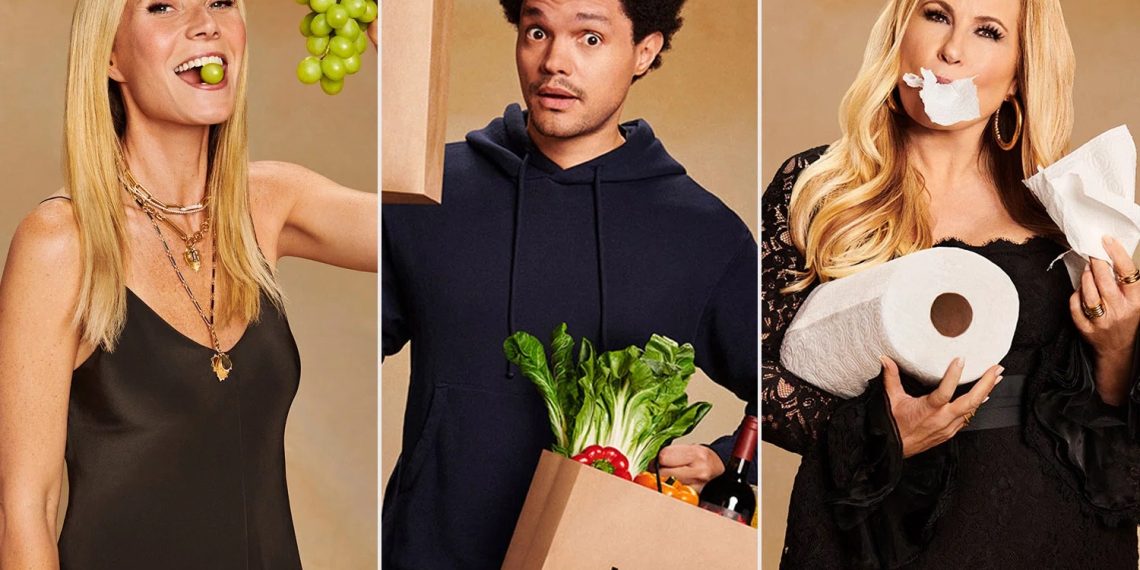 The trio of stars are appearing in the upcoming ad campaign for the delivery service, which, as they’re learning the hard way, offers more than just take-out food.

Teasers for the full commercial dropped online Wednesday, as well as a series of photos of Paltrow, Coolidge and Noah comically posing for the brand.

In Coolidge’s 30-second clip, the White Lotusactress looks confused as she pulls a tube of lipstick out of her delivery bag. “What? Lipstick?” she wonders aloud in her kitchen, as she glances down at a brown paper package overflowing with grocery items. “Lipstick delivered with Uber Eats?”

Inspecting the makeup product further, Coolidge, 60, then tests it out on her tongue before taking a bite of the violet-colored lipstick. “Ooh it tastes like purple,” she exclaims with delight. Suddenly she’s pulling a makeup brush out of her bag next and biting off it’s top. “I love this!” she says. “Oh my God!”

Noah, 37, has a similar experience in his teaser, though his has him eating a tube of deodorant.

Chewing it at first, The Daily Show with Trevor Noah host seems skeptical on the flavor before he finally lets out a sound of disgust.

His haul also contains a roll of paper towels, stacks of pens, Post-its, and a box of light bulbs — all of which he also might presumably take a bite out of at any time. “Uber Don’t Eats” both commercials tease at the end in a hilarious play of words.

As for Paltrow, a photo from her campaign shows the Oscar-winning actress and Goop founder holding her infamous “This Smells Like My Vagina” candle (a collab between her brand and Heretic that retails for $75).

At first, all looks normal until a glance at the glass-wrapped candle shows a bite mark taken out of it.

“This candle tastes funny,” she says in the teaser clip, chewing her bite. “Not bad, but funny.”

The full Uber Eats spot is set to premiere on TV Feb. 13 when the Cincinnati Bengals and Los Angeles Rams face off at Super Bowl LVI live from the SoFi Stadium in Inglewood, California.