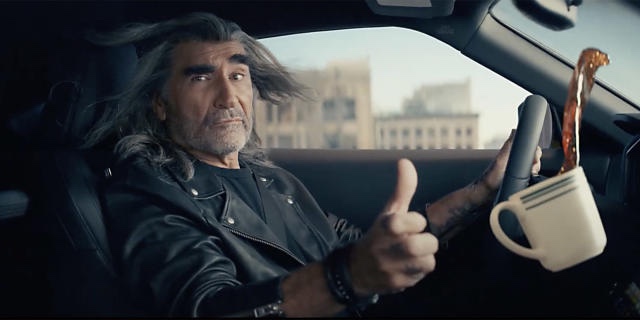 “Schitt’s Creek” fans who’ve longed for another glimpse of the Rose family ever since the beloved series wrapped up in 2020 are about to get the next best thing.

Eugene Levy, the actor and comedy legend who brought patriarch Johnny Rose to life for six seasons, is returning to the small screen for his first-ever Super Bowl ad — and while he’s the leading man, he’s far from the only star in this a one-minute spot for Nissan.

The brief ad, titled “Thrill Driver,” is packed with plot and even features a cameo from yet another “Schitt’s Creek” talent.

It all starts with Nissan’s brand ambassador, Brie Larson, pulling up in a sporty 2023 Nissan Z and offering Levy the chance to take it for a spin.

“Coffee’s enough excitement for me,” the staid and suit-clad star says as he holds a cup of joe.

But when Larson tosses the keys his way, he can’t resist the urge to get behind the wheel and loosen up. A lot.

Moments into the drive, his tie and round spectacles are swapped for an open collar and shades, and the driver in the car next to him can’t believe her eyes at his transformation.

Catherine O’Hara, Levy’s former “Schitt’s Creek” wife, is only onscreen for a second, but it’s enough to capture her reaction to his evolution perfectly.

However, Levy still had a way to go in the high-octane ad — and few big names to mingle with, including Marvel actors David Bautista and Danai Gurira — before he reached his final form, as a long-haired, action movie-ready, man of mystery who deadpans the line, “Well, cock-a-doodle-do.”

The funny ad, which also features Nissan’s new Ariya, will air during the fourth quarter on game day, Feb. 13.

And with that commercial, Levy has officially followed in his family footsteps — both the Rose family and the Levy family.

Just last year, the 75-year-old’s son, in real life and on “Schitt’s Creek,” Dan Levy, starred in a Super Bowl ad of his own for M&Ms.

Exclusive: Chicago’s new brand identity could save the city $10 million a year