by Roastbtrief
in Advertising, Brands
Reading Time: 1 min read
A A 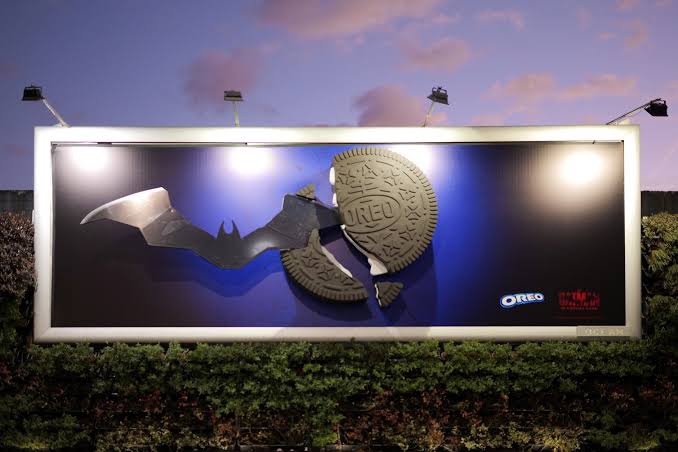 Oreo recently announced a tie-up with the forthcoming “The Batman” movie that will include bat-embossed cookies, and now the brand is set to grab consumers’ attention in the U.K. with some striking outdoor work.

Agency Digitas has created the work, featuring a 3D “batarang” weapon in the same design as wielded by Robert Pattinson’s Batman in the new movie, dramatically embedded in a billboard after having split a massive 3D Oreo cookie completely in two.

The billboards will run across sites in London, Birmingham, Manchester and Glasgow until Feb 14 to support the launch of the Oreo/Batman partnership. The work forms part of the wider integrated campaign by Saatchi & Saatchi Düsseldorf running across multiple regions.

“We wanted to create something that immediately lands our partnership with The Batman, by bringing the brands together in an original way,” said Rafael Espesani, Oreo senior brand manager, in a statement. “It is instantly recognisable and helps us drive cultural relevance and excitement, while making the Oreo cookie look delicious and cool.”

Digitas U.K. worked with media agency Carat U.K. and production company MediaCo, as well as Elvis and Tin Man PR, on the project.

MullenLowe US hires Lu Borges as head of brand and communications