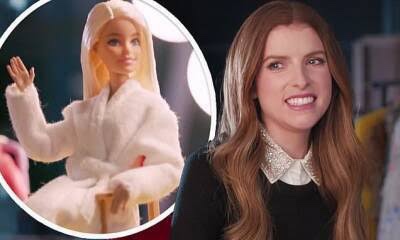 “We always like to approach creative with being able to engage, educate and entertain,” Rocket Mortgage CEO Casey Hurbis said. In the teaser, Kendrick is nervously speaking to a woman she adored since childhood. And at the end of the teaser, it revealed Kendrick is speaking to Barbie. This will be the first Super Bowl commercial for Barbie. As for Kendrick, she previously was featured in a spot for New Castle Beer ahead of the Super Bowl in 2014.

“With Anna Kendrick as a co-star, the concept is a perfect fit to mark yet another monumental moment in Barbie’s history as a cultural icon with her first appearance in the big game,” Lisa McKnight, SVP, global head of Barbie and Dolls Portfolio for Mattel, said in a statement. Highdive is the agency behind the Rocket Mortage ad. This is the same agency that created Lay’s 60-second spot that features Paul Rudd and Seth Rogen.

Super Bowl LVI is set to air on NBC on Sunday.Adweek says that NBC received as much as $7 million for a 30-second ad during the big game. The network says it sold out its ads 10 days before kickoff. “The NFL has never been stronger and has led us to new records this year. From Sunday Night Football to Football Night in America and through the nail-biting playoffs, we’ve seen an increased appetite for fans to watch the NFL across all our platforms,” Mark Marshall, president of advertising and partnerships, NBCUniversal, said in a statement.

“This multiplatform consumption has attracted even more advertisers who have the desire for the immediate scaled reach of sports.” Kendrick continues to stay busy as she set to star in an upcoming film called Alice, Darling. It was recently reported that she has been dating actor and comedian Bill Hader for over a year.

The 2022 PHNX Awards lift off with a diverse jury